Governor Suntai Admits He Is Not Fit To Return To Office 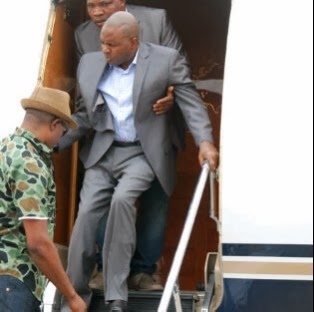 Brain damaged governor of Taraba state, Danbaba Suntai was brought before some reporters to speak about his mental and physical health
status, the cabal using the governor to cause political crisis in the state had consistently prepped Mr. Suntai for the media
appearance , but they did not bargain for what he said to reporters.

Suntai confirmed to reporters that although he needs support to return to office hebwas not fit to return to work asbgovernor, a position that Saharareporters had
consistently maintained in several reports through thisbplatform.

Mr. Suntai was terribly injured in a plane crash near Yola airport in
Adamawa state when a small Cessna plane he was piloting crashed as he approached landing.

Mr. Suntai who was speaking in low and measured tone claimed he had been "drinking" before the crash.