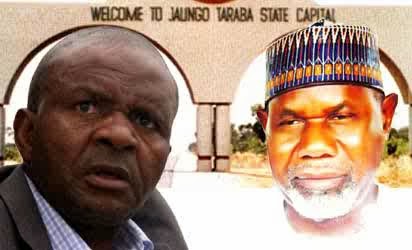 The Say No Campaign -Nigeria (SNC -Nigeria) has asked the acting Governor of Taraba State, Garba Umar,  and immediate family members of ailing Governor Danbaba Suntai to accept the offer by the Nigeria Medical Association (NMA) for an independent assessment of his health in the interest of the development of the state.
Convener of the group, Ezenwa Nwagwu, who made the appeal yesterday in Abuja also urged the Inspector-General of Police and Director-General of State Security Services (SSS) to investigate the video interview on the internet allegedly granted by Suntai and make their findings public.
He said the situation in Taraba State has further underlined the fear that Nigerian politicians value political power, its associated perks and privileges more than human lives.
"The acting Governor of Taraba State and families of Governor Danbaba Suntai should with immediate effect accept the offer of NMA for intervention in this imbroglio. The IGP and DG of SSS should investigate the video interview and publicly declare their findings. We are worried at the inexplicable criminal silence on the part of security agencies and the Federal Government. The media handlers of Suntai should release to the public their authentic version of the video interview.
"Governor Suntai should be allowed to personally refute the appeals in the interview through another video statements or by granting another video interview to a cross-section of journalists," Nwagwu said.
While calling on the Nigeria Union of Journalists (NUJ) and the Newspapers Proprietors Association of Nigeria (NPAN) to rise up to this challenges and collaborate with NMA in resolving the crisis, he advised that the Taraba State House of Assembly to explore constitutional means of investigating and revealing the state of health of Danbaba Suntai to douse the tension freshly brewing in the state.
He said, "Events in Taraba State continue to suffer excommunication and isolation from the rest of the country at the excruciating pains of the people whose elected ailing Governor has become enslaved and trapped by a cabal that has no respect for human life. It is worrisome that Governor Suntai was yet to fully recover from the injuries sustained in the aeroplane crash when he was virtually dragged to the seat of power after being away for 10 months.
"Subsequent political manipulations consumed the then speaker of the State House of Assembly, Haruna Tsokwa, in November, 2013. In Taraba, a small clique fraudulently claiming to act on behalf of the ailing State Governor attempts taking over the leadership of the State including the running of the finances of the state.
"We, however, think his challenge is being compounded by the antics of a self-serving group that wants to keep him in power, instead of allowing him to go for full medical treatment. This is the time for Nigerians to speak out and stand on the part of the ailing governor. This is the time to speak out against this criminal and inhuman act of a small, unfeeling group that is more concerned about making financial gains from the misfortune of the state Governor.