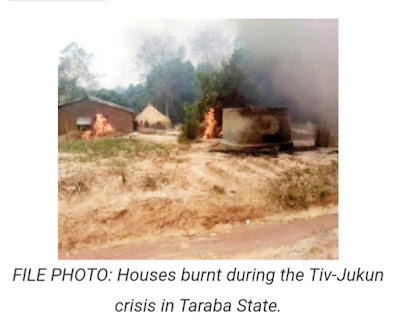 The ongoing Tiv/Jukun crisis will likely cause food shortages in Taraba State. The conflict, which started three months ago, has affected thousands of farming communities in Wukari, Donga and some parts of Takum local government areas, Daily Trust findings revealed.

Farms in the affected areas were abandoned and farmers fled to Wukari, Donga and Takum towns while others crossed to Benue State.

It was further gathered that the affected areas produce 80 per cent of the Yam, groundnut, Maize and rice produce in southern Taraba.

Daily Trust findings revealed that, within the last few weeks, many farmers from both sides in the conflict were killed on the farms or on their way to the farms, a situation that forced farmers to abandon their farms.

The chairman, Wukari local government area, Mr Adi Daniel told Daily Trust that many farmers had been killed on the farms, adding that it was very dangerous to venture out to the farms now. “Our People are being killed on their way to farms or in their farms by militia groups and now everyone is afraid to go to the farms because of attacks,” the chairman said. He called for genuine reconciliation and deployment of security to all affected areas to end the crisis.

Also speaking on the crisis, the Chairman of Tiv cultural Association, Mr Goodman Dahida said the crisis had seriously affected farming activity in the state. He said Tiv people were highly productive in agriculture and they are the ones producing much of the farm produce in Southern and central Taraba and now majority of them have been displaced by the crisis.

Mr Dahida explained that the crisis had forced 90 per cent of Tiv in Wukari and Donga local government areas out of their homes. He said almost all the farms in the affected areas were not cultivated, a development he said will cause serious shortfall of food and cash crops in the state this year.

Similarly, the recent crisis between farmers and pastoralists in parts of Jalingo, Ardo_Kola and Lau local government areas had affected farming activities. It was gathered that several farmers had fled their areas in the wake of the crisis and farms abandoned.