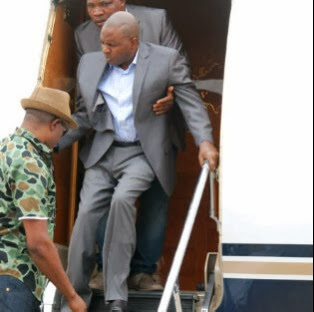 Unwell departing Governor of Taraba State, Danbaba Suntai has reportedly moved his personal belongings from the state Government House in Jalingo.
His departure will usher in the way for the Governor-elect Darius Dickson Ishaku, who will be sworn in on Friday, May 29, 2015.
In the light of the forgone, Suntai, who sustained a severe damaged to his brain in a plane crash on October 25, 2012, has been recuperating in Government House.
He has been in and out of foreign hospitals, improving slightly on his health.
It was learnt that Suntai’s deputy, Abubakar Sani Danladi, who has been ruling the state in acting capacity, bought a house for his principal in Jalingo.
The apartment which may be one of his retirement package as a governor is now being occupied by the family of the departing governor.