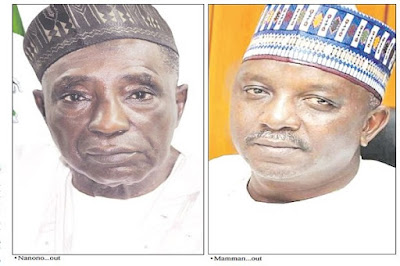 Out are Minister of Agriculture and Rural Development Sabo Nanono and Minister of Power Saleh Mamman.

the President redeployed Minister of Environment Muhammed Mahmood Abubakar, who replaces Nanono in Agriculture Ministry and Minister of State (Works and Housing) Abubakar Aliyu to take over from Mamman in the Power Ministry.

Ministers were shocked when the announcement was made at the Federal Executive Council (FEC) meeting.

Sources told The Nation that the ministers were fired for poor performance and unfavourable security report on their activities.

He failed to take it beyond where it was when he took over,” a source explained.

Nanono, the former Agriculture Minister, was found to have reversed the gains made by the ministry between 2015 and 2019.

Unknown to other ministers, President had informed the ministers of their impending exit from the cabinet before yesterday’s FEC meeting  and had wished them well in their future endavours.

The President also put other ministers on their toes by saying that “the few cabinet changes mark the beginning of a continuous process.”