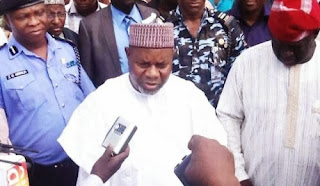 The state commissioner added that the EXCO meeting resolved that commissioner of finance had been mandated to come up with the actual revenue generation of the state especially the internal generated revenue which according to him will give focus and ideas to government on the possible ways of actualizing its target.

The Taraba state commissioner also said deliberation on how best to tackle unemployment of youths in the state were discussed and that government is at present working round the clock to ensure the issue is been handled with utmost seriousness.

Ate Sale Kundu said EXCO had also approved the purchase of 1000KVA generator plant for Bali rural electrification project adding that the state acting governor, Alhaji Garba Umar has agreed the payment of teachers’ salaries in the state and directed the state commissioner of education Hon. Mathias Dan’Azumi to work out modalities to ensure all scholarship students schooling abroad be paid all the allowances
without further delay and expressed concern over their condition.

In area of agriculture, the commissioner said the state government is considering purchasing large number of tractors for teaming farmers in the state which according to him will be a source of internal revenue generation for state through hiring and purchase by farmers.