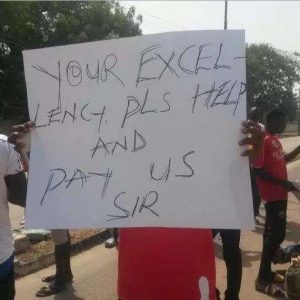 Players of Nigeria National League (NNL) side, Taraba United FC are set to boycott all matches of the club except they receive the backlog of salaries and allowances the State Government owes them.
Saharareporterssport.com exclusively gathered from a source close to the team in Taraba that the players are unwilling to rescind their decision until the government and the management of the club look into their plight by offsetting the previous months’ salaries they owe them.
“The players are currently on strike due to non-payment of their salaries. As I speak the players did not train on Tuesday (today), and they have decided not to honour any league matches until they money is being paid. Because of this issue, the management of the club have even suspended two of their registered players this season,” the source exclusively toldsaharareporterssport.com on Tuesday.
The club was relegated from the Nigeria Professional Football League (NPFL) for similar reasons, after they finished in 19th position. The players also seek the help of the League Management Company (LMC), the Nigeria Football Federation (NFF) and the players’ union, NANPF to look into the situation before it goes out of hand again.