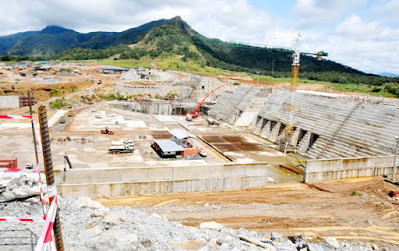 The federal government could end up paying $500 million to an electricity transmission company for allegedly defaulting on a $200 million settlement agreement it entered into with the firm.

Sunrise Power and Transmission Company Limited (SPTCL) is seeking to be paid $500m after government allegedly failed to pay the $200 million compensation it offered following the termination of the contract to construct Mambilla hydropower project located in Taraba State.
The settlement was meant to make Sunrise relinquish all claims to the $5.8 billion project, which has been grounded for 14 years and was originally to generate 3,050 megawatts but later reviewed to 1,525 megawatts.
Government has since re-awarded the same contract to a Chinese firm with Sunrise claiming that the development did not follow due process.
It subsequently approached the International Court of Arbitration in Paris, France for redress, reminiscent of the legal battle between the federal government and the Irish firm, Process and Industrial Development (P&ID).

In documents now in the public space, the federal government, represented by Power Minister Sale Mamman and the Attorney-General of the Federation and Minister of Justice Abubakar Malami, had committed the government to pay the $200 million penalty in addition to the original terms of settlement, while Leno Adesanya, chairman of Sunrise and legal counsel, Jeremie Chouraqui, signed for the company.

Both sides, under the settlement agreement of 21st January 2020, had mutually “resolved that the FGN shall pay Sunrise the net sum of $200 million in irrevocable and immediately available funds to Sunrise’s designated bank accounts which shall be stated in the invoice to be submitted by Sunrise within the stipulated time frame.”

The parties also agreed that in the event of the federal government failing to meet its payment obligations contained in the terms of payment, Sunrise would be entitled to a financial default sanction in the sum of $200 million, in addition to the unpaid principal sum of $200 million.

“This is in addition to the interest on any unpaid sum (including of any financial default sanctions) at a compound daily interest rate of 10 per cent, per annum, until the full payment is received by Sunrise in irrevocable and immediately available funds, in its designated bank accounts.

“Such full receipt by Sunrise shall discharge the FGN from any further extraneous liability to Sunrise in respect of the settlement agreement and this addendum and Sunrise shall then have no further recourse to the Mambilla project.”

Having missed out on all payment deadlines, including the first payment of $100 million, which should have been done over a year ago, the arbitration in Paris may decide the direction the matter will sway.

With the reinstatement of the penalties and the $400 million already accruable, the indebtedness may have hit $600 million, and would rise to $700 million if the 10 per cent per annum interest rate agreed to by parties in the settlement agreement is calculated.

Further communication between Malami and the Chief of Staff to the President, Prof. Ibrahim Gambari, indicated that Malami updated the CoS on the issue to guide the government’s decision on the matter.

Also, Mamman, in a memo dated 19th August 2020 and addressed to Gambari, said: “The Ministry of Power is in total support of the position provided by the AGF who has been the lead in finding an amicable out-of-court settlement to the dispute.

“The ultimate aim of the ministry is to see that Mambilla project implementation can proceed unencumbered, therefore whichever settlement option that can lead to a peaceful resolution for the project to commence will be acceptable by the ministry.”