Another Group Calls For Swearing-In of State Acting Governor 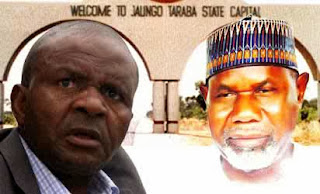 A fresh concern began yesterday over the political leadership in Taraba State nearly four months after the arrival of injured Governor Danbaba Suntai from
medical treatment abroad. The return had resulted in an unusual power sharing arrangement between Mr. Suntai and the Acting-Governor, Alhaji Garba
Umar.

By the power sharing arrangement brokered by the Peoples Democratic Party (PDP) national leadership, recuperating Suntai remains as governor, while Umar is responsible for the day to day administration of the state, in consultation with Suntai. While capital expenditures are for instance, dispensed with the approval of the governor, contingency funds are shared between the office of the governor and that of the Acting Governor, in what is believed to be a weird parallel administration in a constitutional democracy.

Competent sources said yesterday that the arrangement is beginning to generate an uneasy calm as it has resulted in the stalling or the frustration of state projects and proposals, creation of lethargy in decision making process, mutual suspicion amongst Suntai and Umar aides and the exposure of the ethno-religious fault-lines of the Taraba people. Worried about these developments, a nascent group, The Save Taraba Group (TSTG) said yesterday in a statement that “a nation that does not abide by its laws is wont to have these kinds of troubles. Laws are made to be obeyed by a people and it is meant to regulate affairs so that anarchy can be kept in abeyance”

In the statement signed by its Coordinator, a prominent Abuja Lawyer, Mr. Adamu Bello and Comrade Inuwa Benson, the group stressed that what should have been done ages ago is the call for the medical examination of Suntai. “And if it is proven like we all now know even as a matter of fact that he is no longer capable for the rest of his tenure to run the affairs of the state, then for Heaven’s sake his deputy should be sworn in as substantive governor. The present arrangement is simply papering a crack. It is retrogressive and unhelpful to the people and future of Taraba State”

The group added that for over one year now “Taraba State has been in a state of confusion. How much power can the acting governor wield when he is being overlooked by a cabal that is itching to call him a betrayal? Then what governance value can the ailing Suntai bring to the table in the complex process of state administration? We call on the Taraba State House of Assembly to now rise to the occasion and do the needful: Swear in the acting governor so the state can truly move forward. Doing that will keep them on the right side of history, but doing otherwise will condemn them before history. The ball is in their courts.”

Adding his voice to the concerns, another Taraba indigene, Dr. Ahmed Usman, revealed that “Gov. Suntai was ordinarily not supposed to have been returned home at the time he did, but a cabal led by a powerful general spearheaded it, highlighting the fears of the people that facts are being mortgaged for emotions and sentiments. Now, who is suffering the effects of their poor judgement?

Everyone, including the cabal, of course! They may think they are comfortable senior citizens, but what about the future of their children and their children’s children?”

Lagos Lawyer, Mr. Femi Falana has also argued in a letter that “the medical state of the governor should be made public in the interest of the people of Taraba State and Nigeria as a whole…. Having regard to the experience of acting President Goodluck Jonathan (as he then was) under the cabal that illegally ruled the country when the late President Umar Yar’Adua was in a state of coma, the federal government should not hesitate to defend and protect the constitution in Taraba State in the interest of law and order in the country.

“All men and women of goodwill in the country should team up with the democratic forces in Taraba State to end the brazen impunity of those who are exploiting the health of Governor Suntai to achieve dubious political objectives. The governor should be freed to return to the hospital for further treatment without any further delay.”