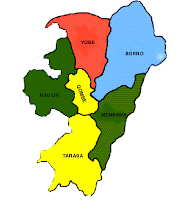 The Federal Government has proposed N2 billion in the 2014 budget as counterpart funding for a special economic development initiative for the North East. This is coming about three weeks after President Goodluck Jonathan promised a “special intervention programme” for the region.
During the 2nd North-East Economic Summit in Gombe earlier in the month, Jonathan announced that the region will soon benefit from a special intervention programme being packaged by the government to accelerate the zone’s socio-economic development.
Details of the 2014 budget available to Daily Trust show that N2 billion was provided under the heading “Federal Initiative for North-East (Pilot Counterpart Funding Contribution).”
The use of the phrase ‘counterpart funding’ indicates that the programme would be run together with the six states in the zone.
At the North East summit, Jonathan explained that the programme he was coming up with would be executed in partnership with governments of the states in the area.
He said the damage suffered by the zone because of the Boko Haram insurgency necessitates “aggressive and urgent action.”
He said, “My administration is committed to doing all within its powers and abilities to end the security problems of the Northeast and help the region to productively harness its abundant resources once again for the benefit of its people and all other Nigerians.”
The president added that, “There can be no doubt that the unique experience that this region has had with Boko Haram necessitates aggressive and urgent action to revitalise its economy.  Such action entails a functional partnership involving the Federal Government, state and local governments as well as traditional leaders of thought in the region.
“There is a need for the Northeast to join forces with the Federal Government in articulating a unique transformation vision and plan to drive the region’s future.  The plan I envisage must be based on a partnership model in which all of us must play our respective roles.”
Jonathan explained that the administration was at present consulting with the six Northeast states “to define a shared vision, workable strategies and responsibilities of all stakeholders for the economic resurgence of the region.”
The 2014 federal budget document did not provide additional details of the North East intervention programme.