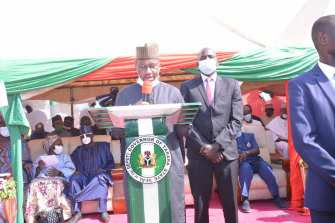 The Mararaba-Donga road has been flagged-off by His Excellency, Arc. Darius Dickson Ishaku. The ceremony which took place at Mararaba town brought together top federal and state government functionaries.
The road which is a single carriage road is at a stipulated contract sum of 6.30Billion Naira and is expected to be completed in the space of three years.
His Excellency Governor Darius Ishaku ably represented by his Deputy, Engr Haruna Manu in his remarks said the Rescue administration in Taraba State has since inception taken to heart the plight of Tarabans.
Manu said the road being flagged-off today is of economic importance to the immediate community and the state at large and despaired the earlier rumours been peddled by some mischief makers alleging that the state government is not in support of the project, he said this is not true and those doing this are enemies of the state who don’t have Taraba at heart.
He said Taraba State has embarked on the construction of other multimillion naira roads which include Jalingo-Kona road, Wukari-Tsukundi Road and the recently flagged-off Mararaba-Baisa Road.
Preparation to the flag off by the deputy governor standing alongside the Distinguished Senator representing Southern Zone, Emmanuel Bwacha and other dignitaries.
The deputy governor said all the federal roads sighted in Taraba are for the good of Tarabans and that’s why the state government has never at anytime waited for the federal government to give a go head before constructing any.
He however appealed to FERMA to look into some state and interstate roads such as Jalingo-Numan-Yola road which has become a death trap.
Manu lastly pleaded with the National Assembly members to do all they can to mount pressure on the federal government in order to complete the Mararaba-Donga road at a very good time, promising that the state government’s doors are always open to any workable suggestion that will bring developments to Taraba State.
The FERMA Repreentative called on the community to give the contractor all the necessary support needed to complete the road at a very good time.
He disclosed that all the menial jobs during the execution of the project will be done by the indigenes of the state and promised on behalf of the contractors to deliver a qualitative job, saying the project is so dear to Mr. President and will be completed in less than 3 years.
Senator Emmanuel Bwacha speaking shortly before the flag off promised to appreciate the president and assured that a steady follow up will be done on the project, stressing that he will make sure that the job is carried out to the latter
He however sounded a note of warning that anyone who is caught .
collecting any form of gratification from the contractors will not be spared.
He said they are not into competition with anyone and are only in the business of serving Tarabans and will always do everything possible to reach areas where the state government may not reach either as a result of oversight.