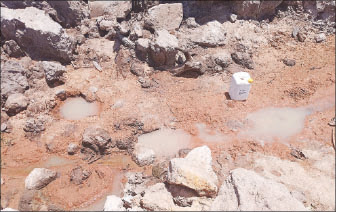 Access to drinkable water is not a challenge in Jalingo  compared to other villages. It could be fetched at the easiest convenience.

However, a few kilometers out of the town is Gongon Mahuja. It is in Wuro Sembe area of the state capital. In this suburb, with a slightly high density of human population, drinkable water is a luxury.

Access to it is extremely difficult. The town suffers from the combined impediments of a general lack of water for their daily needs and an absence of healthy, drinkable water. The villagers told Daily Sun, last week that residents of Gongon Mahuja access their daily water directly from a small pond and a gully that dries off during the dry season.

Mr Bala Yohana said: “The water situation here is very bad. In fact, now that the rainy season has started again, you will not understand how bad it gets at the peak of the dry season.

“Some children even stop going to schools because they spend the whole morning trying to scoop water from the fast drying pond. Usually, this gully dries up once the rains stop and all attention is focused on the pond. Unfortunately, we have a few wells that we dug, but they usually dry off during the dry season. It is not funny at all.”

Mercy Abba, another resident, said: “By now I am supposed to have finished school, but I repeated a class three times. Usually, when there is no water, we have to wake up early in the morning and queue for hours before we can get water.

“By that time it is already too late to go to school. Some times even when we get drinkable water, we still have problem having enough water to bath and wash our uniforms. The best thing is for the government to come and drill boreholes for us here so that we would not just concentrate on the pond.”

A medical doctor who did not want his name mentioned said the water situation was responsible for a number of health challenges in recent times in the town. He argued that there was usually a corresponding upsurge in ailments attributable to the in-take of bad water once the water begin to dry up, recalling that a few people lost their lives because of bad water.

He lamented that it inexcusable to experience water issue in the town given its proximity to the state capital, where water is not a problem. He urged government to redouble its efforts in ensuring that water gets to everybody in the state, irrespective of whether the resident is in the city or in the village.

Another health personnel said during scarcity of water supply, both human beings and animals depend on a common source of water supply: “The situation often leads to contamination, which puts the people in dangers.”

Daily Sun learnt that government invested billions of naira to boost water supply. This included provision of motorised and hand-pump boreholes, through agencies such as the Community and Social Development Project (CSDP).

Equally, the Catholic Diocese of Jalingo has a programme through which they drill boreholes for communities in dire need of water. However, lack of equity in distribution of these people-oriented programmes has left some villages and towns such as Gongon Mahuja still in dire need.

“Government still has a responsibility to ensure that it supervises whatever is budgeted for water supply to the people. This supervision includes ensuring that projects