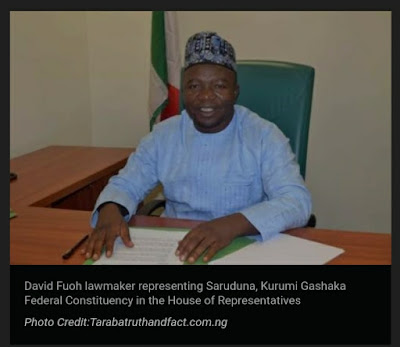 The Taraba Concerned Citizens Forum (TCCF) has accused the lawmaker representing Saruduna, Kurumi Gashaka Federal Constituency in the House of Representatives, David Fuoh, of attempting to sweep allegations of corruption against him under the carpet.

Fuoh was accused of siphoning hundreds of millions earmarked for the development of the Taraba State Polytechnic between 2015 and 2019 as bursar of the institution.

HOW BILLION WAS LOOTED  IN TARABA STATE POLY

It was alleged that the lawmaker paid contractors for projects that were never executed, diverted funds into personal accounts, shortchanged staff of the institution, embezzled students school fees, among other gross financial misappropriations.

A visitation panel constituted by Darius Ishaku, the state governor in 2020 and led by Nicholas Namessan, had indicted the lawmaker of orchestrating withdrawal of unaccounted funds from the institution's treasury alongside Daniel Mom, former rector, during the period under review.

But TCCF had accused the lawmaker of attempting to evade justice in the matter.

The group called on the state governor to make public the panel's report and forward such to the Economic and Financial Crimes Commission (EFCC) for proper investigation and possible prosecution of Fuoh and others indicted in the report.

According to the group coordinator, Mansur Munkaila Jirgi, the report must be submitted to the anti-graft agency to ensure it was not a deliberate move by Ishaku's administration to protect the indicted duo, whom he claimed, joined forces in setting machinery in motion to underdeveloped the institution.

Speaking during a press conference in Jalingo recently, Jirgi said that apart from making the report available to the EFCC, the group would also be "writing the National Assembly leadership where Fuoh is now a member to intimate them the report of the visitation panel which grossly indicted him."

He added: "What happened in Taraba State Polytechnic between 2015 and 2019 must not be allowed to go down the drain because such is harmful to our future as a state. A visit to the State Polytechnic campuses in Jalingo and Suntai will show you the rots between 2015 to 2019 as exposed by the Visitation Panel Report, which powerful forces in the state are battling hard to cover up.

"The polytechnic was, during these years, deprived of the opportunity to grow and become a world-class institution. Our unborn generation will ask questions if those who perpetrated these lootings are not made to face the law irrespective of religion, tribe or political affiliations.

"The government must not be high handed regarding demanding accountability from these people in question. Again, this has nothing to do with politics; it's a criminal offence to steal public funds. It's immoral to conceal it either."