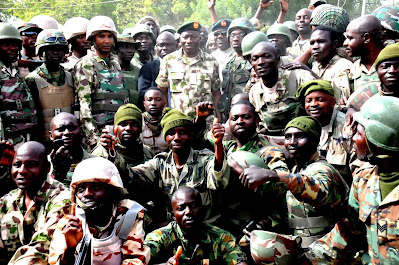 The Nigerian Army has trained 606 personnel to help nip in the bud, the insecurity bedevilling the country including the activities of insurgents in the North East.

The military personnel were trained at the 20 Model Battalion, Serti in Gashaka Local Government Area of Taraba State where they were made to undergo intensive leadership and regimentation courses for a period of three months.

At the end of the programme, a graduation ceremony was held in honour of the Regular Course 67 and Short Service 46 of Course 9 on Friday in Serti.

He explained that the training became necessary in view of the lapses observed in the theatre of operation.

The GOC noted that the security challenges in the country called for new approaches, hence the training of the personnel to prepare them for the task ahead.

“Before now, there was no course like this for officers who graduated from the various training institutions in the Nigerian Army Officers Cadre and it was because of the lapses observed, particularly in the theatre of operation as it relates to leadership.

“The former Chief of Army Staff deemed it necessary for them to start this programme and that is the Genesis of the programme,” he said.

Danmadami added, “The army has spent money to train you for three months period and, therefore, we expect that when you return to your respective units, you will begin to reflect and showcase what you have learned for the period you were here.”

He, however, advised the newly trained to spend their salaries wisely and avoid an extravagant lifestyle.

The Commanding Officer of the Battalion, Colonel Abdullatif Raji, gave an insight into what the training was about in military formations and its impact in having a repositioned Nigerian Army devoid of indiscipline.

He said, “The overall objective of the course was to prepare and acquaint newly commissioned officers with the prerequisite of leadership and regimentation in the Nigerian Army, especially at the unit level before been posted out for military duties ”

“Other objectives that were attained were enhancing the officers’ skills, training young officers on tactical manoeuvres to combat internal security and to understand modern contemporary security challenges, as well as inculcating a sense of consciousness in their appearance and further building their level of confidence.”

The students were initially 613, but one of them died as a result of ill health, four others were referred to various military hospitals, and two officers invited to CMIs interview.

To showcase how well the lessons were inculcated, the student officers were asked to parade, strip and assemble Alexander Kalashnikov (AK) 47 rifle, beretta pistol, General Purpose Machine Gun (GPMG) in some seconds.

One after the other, they were presented with certificates of graduation, and awards of excellence for distinguishing themselves and attesting to the training they have gone through.

The overall best among the student officers, Idris Salami, who spoke on behalf of others, promised to reciprocate the gesture by reflecting and showcasing lessons learnt.