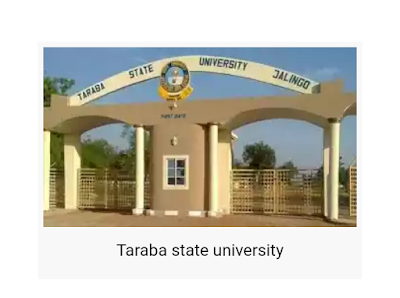 The Academic Staff Union of U n i v e r s i t i e s , ASUU, Taraba State University chapter, has given reasons for embarking on an indefinite strike, stressing that they lack job security working as lecturers in the university.

Addressing newsmen shortly after the meeting, the Institution’s ASUU Chairman, Dr. Samuel Shikaa, said the association resolved to embark on the industrial

action to demand compliance to an agreement the state government and the university management signed with the association.

He listed some of their demand to include, the commencement of their Contributory pension scheme, prompt payment of their Earned Academic Allowance, EAA, among others.

According to him, “Taraba state university has no pension arrangement and you can quote me anywhere.

“Families of some of our colleagues that have died only received paltry sum for burial rites which to us is not a terminal benefit. “And to some others who left this institution to other universities, they have nothing to benefit.

“Our members are ready to commence deduction from their take home for the contributory pension scheme but we also want government commitment that their percentage of the contribution would be honored.

“On EAA, the allowance for excess workload since 2013 has accumulated and has not been paid.”Shikaa, said the union sympathizes with the students, “It was because of this sympathy that our members allowed the students to write their first semester exams for some weeks.

“We have tried on our part to ensure that we maintain harmony as much as possible. All we are saying to the

students is that they are part of us and we are part of them because there would be no students if there are no lecturers and vice versa. We want them to understand us and also pressurize their parents to speak out because it is ridiculous if their lecturersdon’t have job security.”