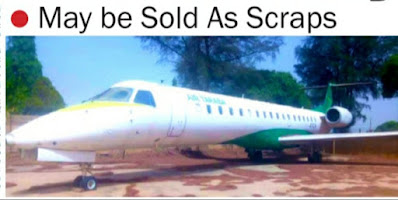 Three aircrafts owned by the Taraba State government are left unused in Abuja and Kaduna Airports.

Danbaba Danfulani Suntai was abandoned after his ill-fated plane crash which left him bedridden till the end of his tenure.

The aircrafts which include, a Bell helicopter and two small aircrafts; a Cessna 208, 5N-BMJ and two Embraer ERJ-145 jet cost the state government about $21

million, about N4.13bn which was the exchange rate at the time of purchase.

The late Governor Suntai later crashed in the Cessna 208, leaving the state with 5N-BMJ and two Embraer ERJ-145 jets which are currently abandoned in Abuja and Kaduna. While the Bell helicopter is parked at the Government House, Jalingo.

Taraba Truth and Facts investigations revealed that the state government is owing the Federal Airport Authority of Nigeria, FAAN millions of Naira for parking the aircrafts in its hangers in Abuja and Kaduna

airports. Highly confidential sources who are in the picture of the abandoned aircrafts, said the state

as scraps because it has not been used for years and might have become unserviceable.

“Currently the aircrafts are categorized as scraps or stored. That is the status for aircrafts which no longer fly after some years. The ‘Parked’ status corresponds to planes which have not flown for 20 days but of which we have no information that they have left the operator’s fleet, “ the source said.

Air Taraba was established by the late governor, Danbaba Danfulani Suntai, as a state-funded carrier in

Between 2013 and 2014, Acting Governor Garba Umar UTC renegotiated the ongoing payments for a new ERJ 145 initiated by late Governor Suntai and got a rebate to the tune of 500,000 USD.

In April 2014, Skyworld Aviation announced the delivery of an ERJ 145 to Air Taraba, Nigeria, it was received by then Acting Governor Garba Umar who completed its payment. The aircraft was to serve the state alongside an existing ERJ 145.

According to the Nigerian Civil Aviation Authority (NCAA), records, Air Taraba was among seven new airlines to have applied for an Air Operator’s Certificate (AOC) in 2012.

planned to start a state-owned airline while purchasing the aircraft.

administrations were not interested in using the aircrafts despite billions of Naira of the state fund was invested into it.

The former commissioner who does not want to be named said a state-owned airline would improve the economy of the state.