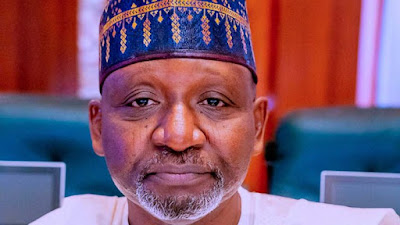 By Hassan Madu Karim
Engineer Mu'azu Jaji Sambo's indelible name continues to make good headlines over the last few months. When one follows updates from Tarabans, he or she could easily notice how virtually all Tarabans continue to spread the unprecedented good works initiated by the indefatigable Minister of State Works and Housing, Engineer Mu'azu Jaji Sambo. His indelible name continues to pervade all nooks and crannies in Taraba State, owing to the unprecedented physical infrastructures he continues to lay in the State.
Undoubtedly, Taraba has never had it this pretty good before his coming. No one can deny the obvious fact that he has achieved what his predecessors had failed to achieve put together.
From Primary Board to Gate One, Modibbo La'ilah to Hassan Primary School, the tattered roads have been fixed beyond recognition. Needless to say, Engineer Mu'azu Jaji Sambo has, by far, outperformed all our elected rulers put together.
Obviously, he knows where our shoe pinches, and he's tirelessly working round the clock to fix it. For the umpteenth time, he's proved that he is always ready to put out our excruciating pains, as his relentless commitments to fixing our dilapidated roads depict.
Under his fruitful supervision, the long-ignored Numan-Jalingo road is about to take good shape. As I rightly suggested a couple of days ago, when successfully completed, the long-abandoned Numan-Jalingo road should be renamed after his name so as to appreciate his unforgettable effort.
His timely coming as a State Minister has dispelled the unfounded rumours that always depict State Ministers as impotents under their various ministries. He has proved that with sincere commitments and dedications, State Ministers can do wonders than expected, and we have proved that beyond any reasonable doubt ever since he came onboard.
From Taraba North senatorial district to South, Central to North, his unprecedented good works speak for him. In fact, Tarabans, irrespective of their ethno-religious or socio-political differences are so proud of him, for he relentlessly works for it and rightly earns it.
In His infinite mercy, may Allah (S.W.T) continue to protect, guide, elevate, and strengthen him more and more. Amen!