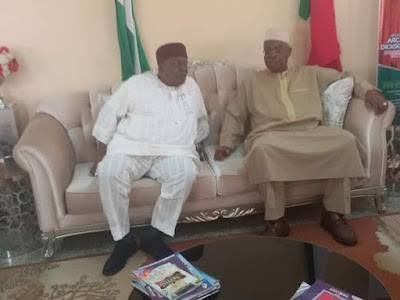 Members of the Peoples Democratic Party (PDP) in Taraba State have warned the leadership of the party against the planned imposition of a gubernatorial candidate on them.

The angry supporters who issued the warning via their social media handle also appealed to the former Minister of Defense, General Theophilus Y. Danjuma, fingered in the plan, to as a matter of urgency drop his alleged plans of bringing in the incumbent chairman of the party, Lt. Col Agbu Kefas (rtd) as the party’s gubernatorial candidate.

Currently, tension is mounting among party supporters in the state over the proposed candidate, whom The Guardian gathered did not procure the nomination forms or appear before the PDP governorship screening committee in Bauchi State.

It was gathered that the elder statesman, who came into the state last week Thursday in a chartered flight, reportedly endorsed the chairman, whom many believed to be his godson as the party’s candidate.

Confirming the report, a chieftain of the party, who spoke with The Guardian on the condition of anonymity, said “yes the elder statesman was in Taraba on Thursday, and we are very much aware of his plans to impose on us a candidate of his choice.”

Though he refused to reveal the identity of the candidate, he, however, said “discussions and consultations are still ongoing.” Some of the aspirants “who have been working round the clock canvassing for the support of delegates” according to him, “vowed to resist any form of imposition.”

The party’s supporters who are uncomfortable with the moves have as well take advantage of their social media handles, especially their Facebook pages to kick against the ongoing plans.

In their various handles, they “vowed to engage in protest vote should T.Y Danjuma have his way,” adding “We shall resist every form of imposition of candidate.”

Stressing that imposition of candidates has “never been of good interest to us,” they collectively stated, “It is about time we chose for ourselves because we have come of age.”

The people who claimed that all the people the elder statesman had previously imposed on the state “performed woefully,” passionately pleaded with him and the leadership of the party, to allow Tarabans go to the poll and choose whom they desire to govern them come next political dispensation.

A chieftain of the party, who confided in The Guardian, said, “if this plan eventually sees the lights of the day, I bet you, PDP will be doomed in Taraba.”