Vice President Yemi Osinbajo has said Nigeria’s future is still bright despite the ethnic and religious crises and differences.

Osinbajo stated this in Jalingo, the Taraba State capital when he visited the state to canvas for delegates votes for the coming All Progressives Congress (APC) presidential nomination.

While addressing journalists shortly after a closed-door meeting that lasted for over an hour with the delegates, he emphasised that Nigeria’s economy is still workable if all hands are brought on deck.

The vice president who arrived at Danbaba Suntai Airport, Jalingo at about 10.00 am and was received by Governor Darius Ishaku of Taraba State and other state government functionaries including chieftains of APC in these h 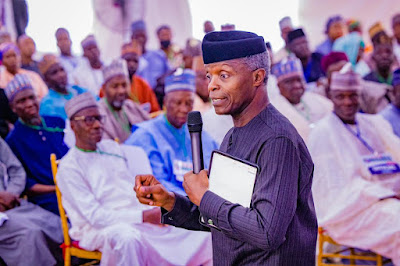 state headed straight to the venue where he met with the APC delegates.

The delegate meeting observed by LEADERSHIP was attended by the State Working Committee of the party and party chieftains  including former deputy governor of the state, Alhaji Alma Yau, Ambassador Emmanuel George, Engr Hammed Yusuf and former chief of staff Gavey Yawe.

Osinbajo also expressed delight over the warm and elaborate reception accorded him in the state by the governor and the APC members.

He said the enthusiasm and excitement expressed by the people of the state irrespective of ethnic or religious background is an indication that the future of the country is very bright.