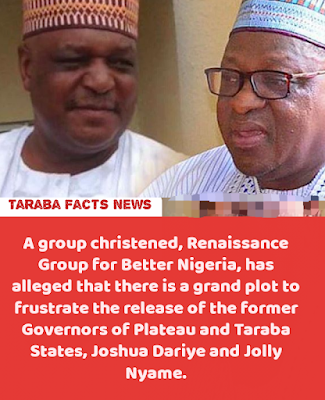 A group christened, Renaissance Group for Better Nigeria, has alleged that there is a grand plot to frustrate the release of the former Governors of Plateau and Taraba States, Joshua Dariye and Jolly Nyame, as well as 152 others recently granted a pardon by the National Council of State (NCS).

It would be recalled that the duo of Dariye, Nyame and others were recently granted pardon by the National Council of State on account of ill-health and other reasons.

The group, in a statement signed by its Chairman, Jonathan Ibrahim and made available to SATURDAY INDEPENDENT, expressed surprise and disappointment that weeks after the pardon by the National Council of State, nothing has been done to effect their release.

According to the group, there should be no need for delaying their release since the pardon was granted by the highest decision making body in the country, adding that the decision of the body is to be executed on without much ado.