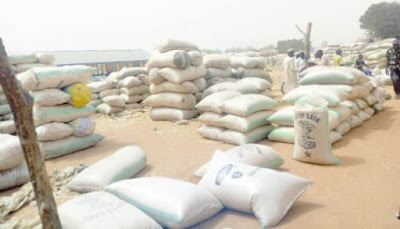 Prices of maize and paddy rice have crashed in Taraba again to an all-time low since the ban on importation of the commodities by the federal government became effective.

It was also revealed that prices of the commodity crashed as a result of  the absence of grain merchants following an increase in the price of diesel, which is now sold at N950 per liter in the state.

It was further gathered that an increase in transport fare has discouraged many merchants from coming to the state to buy grains.

Our correspondent learnt that a trailer-load of maize, which used to cost between N750,000 and N900,000 to Abuja and the eastern part of the country, has increased to N1 million and N1.2 million as a result of the increase in the price of diesel.

Similarly, attacks on trailer drivers in southeastern states by the Indigenous People of Biafra (IPOB) militants also prevented grain merchants from that part of the country from coming to buy grains in the state.

It was also gathered that other factors that caused the crash in the price of maize is that farmers have brought out their stocks of produce to the market following the start of the farming season.

“We need money to start the farming season, that is why most farmers brought out their stocks to the market,” a farmer, Falalu Suleiman said.

According to Suleiman, the practice is that at the beginning of the farming season, farmers used to bring out their stocks to the market to sell and get money for farming activities.

It was  also gathered that the price of both paddy rice and the locally processed type came down to N14,000 and N15,000 as a result of bumper harvest witnessed by dry seasoning farmers .

Newly harvested paddy rice from Karim-Lamido, Sheka, Gassol and Didango irrigation farms has flooded grain markets across the state, resulting to a crash in the price of paddy and locally processed rice in the state.

He said the area witnessed banditry in the past but was now safe, which enabled farmers to access their farms and harvest their crops.

Findings at Mutumbiyu, Iware, Maihula and Garba-Chede grain markets showed that there were many stores stocked with maize, but no buyers, a situation that forced the price down.

“What is worrisome is that we have thousands of bags of maize in our stores but there are no buyers, and there is the likelihood that the price would further go down,” he said.