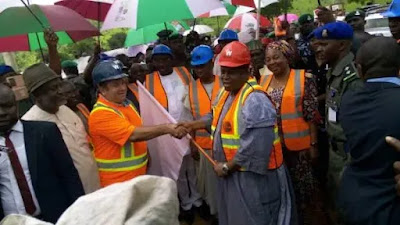 Residents of Yoro Community in Yoro local government area of Taraba state, have decried the failure by Governor Darius Ishaku to complete the 6.3bn 20km Mararraban Pantisawa road within three years as promised in 2017.

Naija News reports that Governor Darius Ishaku had on July 26, 2017, flagged off the construction of the 20km road from Lacheke village, Mararraba Pantisawa, worth the sum of 6.3bn, with the promise that the road would be completed and commissioned in December 2019.

Mr. Ishaya Zanya and Baido Ado expressed displeasure that the 20km road after five years has not reached 40 percent completion.

The residents expressed fear that the project may end up being abandoned since the governor has less than one year in office to leave.

“By next month July 26, 2022. this project would be five years and you can see yourself that it has not reach 40 percent completion.

“The governor during the flag off ceremony in 2017, assured us that the road would be completed and commissioned by December 2019 and we don’t know why he has failed to fulfil his promise.

“The contractor of this project, Engr. Peter Petro said at the event that payment was going to be in three phases and the first phase would be made when the project reached 30 percent.

“We don’t know if the government has not paid the second phase that the contractor has stopped working.

Language
Share
Vidverto Pla
“This is almost five years now that this road is still under construction and we can’t see the possibility of this road been completed within a few months that the governor is left with, to finish his tenure.

“This is just a 20km road, if less 40 percent would be done in five years then, how possible will it be for more than 60 percent to be done in few months?

“We voted massively for the governor in 2015 because of the promise he made to us about the road when he visited the palace of Chief of Mumuye, Ado Adamu Mazang during his electioneering campaign.

“We thought he tried by awarding the contract in 2017 and we were motivated to vote for him for the second time in 2019 with the belief that he would ensure the completion of this road.

“It seems that our faith is lost since the project has not reached 40 percent completion and the governor is left with less than a year in office,” the residents decried.

Our correspondent also reports that the contract is been handled by WESANY International Concepta, a German company which according to Governor Ishaku during the flag off in 2017, the company will also construct 5000 housing units and sell to civil servants in the state and other interested persons at an affordable cost.

The governor also noted at the event that the construction of the road was to open up Pantisawa, the headquarters of Yorro Local Government to various socio-economic activities, particularly, agricultural activities which were the hallmark of the local government for more development of the state.