Why We Can’t Release Dariye And Nyame, Others Despite Pardon – Nigerian Correctional Service

on June 27, 2022
JNyame is serving a 12-year jail sentence for diverting N1.64 billion during his tenure as governor of Taraba, while Dariye is serving 10 years’ imprisonment for N1.126 billion fraud. 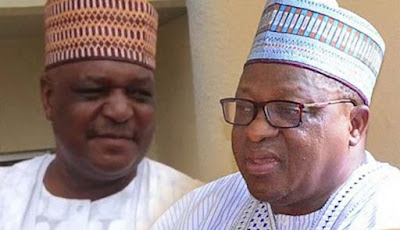 Sunday PUNCH reports that two months after they were granted state pardon, 159 convicts, including a former Governor of Plateau State, Senator Joshua Dariye, and a former Taraba State Governor, Jolly Nyame, have yet to be released.
The Council of State led by the President Muhammadu Buhari (retd.), had on April 14 approved the pardon of the convicts, a decision which generated outcries.
Nyame is serving a 12-year jail sentence for diverting N1.64 billion during his tenure as governor of Taraba, while  Dariye is serving 10 years’ imprisonment for N1.126 billion fraud.
But while justifying the clemency, the Senior Special Assistant on Media and Publicity to the president, Garba Shehu, had said it would have been insensitive for the President not to pardon the duo, saying that they had life-threatening illnesses.
However, checks by our correspondent on Friday revealed that the two and others granted the state pardon were still in custody.
When contacted about why the two former governors were still in their custody, the spokesperson for the Nigerian Correctional Service, Abubakar Umar, explained that the NCS was not responsible for the delay.
According to him, the duo could not be released by correctional service until a correspondence from the Ministry of Justice stating so was received.
Umar said, “Why they have not been released is because we are still waiting for correspondence from the Ministry of Justice. The moment we get that, we will effect their release. It is a presidential pardon, no doubt, but there must be a document to back their release. They can’t be released on pronouncement alone.”
Efforts to get the reaction of the ministry, through the media aide of the Minister of Justice and Attorney General of the Federation, Umar Gwandu, were not successful. He didn’t pick up several calls to his line and had yet to respond to a text message sent to him on the matter.
Meanwhile, there is palpable anger in the Bokkos Local Government Area of Plateau State over the non-release of Dariye from the correctional centre.
Some kinsmens of Dariye, who served as a governor between 1999 and 2007 and hails from Mushere community in the Bokkos LGA, condemned how the Federal Government was handling his matter, describing his continued detention as strange.