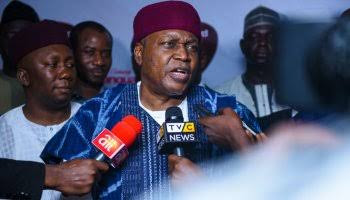 The Southern Taraba Elders Forum of the Peoples Democratic Party (PDP) has said the zone should retain power in 2023.

Briefing the press in Jalingo, Taraba State, yesterday, the convener, James Audu, described Taraba South as the right zone to produce the next governor, despite that the incumbent, Darius Ishaku, hails from the zone.

“Those clamouring for power shift to Taraba North are very wrong,” he stated, recalling that Rev. Jolly Nyame, who hails from Taraba North, ruled the state for 10 years.

Audu explained that Nyame governed the state in the Third Republic from January 1992 to November 1993 and in the Fourth Republic from 1999 to 2007.

His words: “Don’t forget that Garba Umar and Abubakar Danladi all from Taraba North, separately served as acting governors for more two years – from October 2012 to May 29, 2015.

“From Taraba North, the slot went to Taraba Central when Danbaba Suntai was elected governor in 2007. Suntai’s tenure ended in 2015.”

According to Audu, Taraba South was the last to produce governor, when Ishaku became governor in 2015 and was re-elected in 2019.

For their patience alone, he argued, the rotation is supposed to restart from Taraba South.

He noted that the issue of zoning or powershift “is not a constitutional matter, but a gentleman’s arrangement” to ensure fairness and sense of belonging to all.

“However, the most important thing we should be looking at is the credibility of candidates: who has the required qualities to serve well,” he added.

The PDP elder noted that the party did the right thing by giving its gubernatorial ticket to someone from Taraba South.

His words: “The PDP candidate, Col. Agbu Kefas (rtd), the former PDP state chairman, is one of the most qualified to take over from Ishaku.”