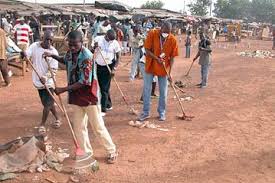 About 372 casual staff employed by the Taraba state Ministry for Urban Planning to sweep streets in Jalingo, yesterday staged a peaceful protest over the non payment of their salaries for nine months.
Speaking on behalf of the protesting staff, Mr. Bulus Yakubu, said they had been sweeping streets in Jalingo for the past nine months without payment.

“We report at our duty posts as early as 4am daily to sweep the streets, but the government has refused to do its part,” he said.

He said they would not go back to work until they wee e paid all their outstanding salaries.
Permanent Secretary in the Ministry for Urban Planning, Mr. Major Abba, while addressing the protesting workers said he has presented their case before the state executive council and that it is being looked into. Mr. Abba told the casual staff to remain calm and continue with their work, adding that they will soon be paid.
The permanent secretary noted that N16 million was required to offset the outstanding salaries.
He added that the casual staff were employed four months ago to sweep streets in Jalingo metropolis as part of the government’s efforts to keep the state capital clean.
Abba further stated that lack of running cost in the ministry was responsible for non payment of salary to the casual staff.