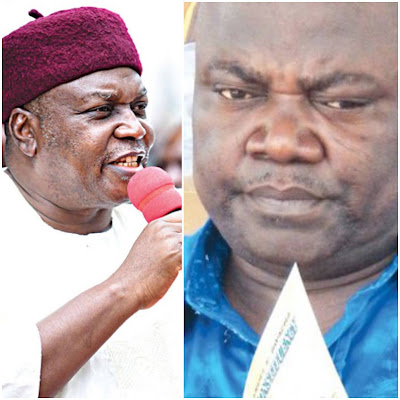 The battle for supremacy between Deputy Minority Leader Senator Emmanuel Bwacha, Taraba South, entered a new level Tuesday, as the Senator dragged Governor Darius Ishaku to the Economic and Financial Crimes Commission (EFCC) through a petition of his own. Recall that Governor Ishaku had also petitioned the anti graft body through two of his aides alleging misapplication of constituency funds. Darius Petition had earlier suffered a set back after it was thrown out by the ICPC. The petitioners are now asking the EFCC to do a "better job than the one ICPC did".

But in a counter move, Bwacha has also fired a petition to the EFCC. In a strongly worded document signed by Bwacha's aides, the senator is accusing Gov. Darius of throwing the state into unnecessary debt. Bwacha said while Gov Darius private businesses are booming across the country, the state has remained stagnant and mired in debt.

The petition reads in parts:

"Taraba Future is Stolen: A Petition Against the Government of Arc. Darius Ishaku of over the Mismanagement of Borrowed Funds

We write to express our displeasure and concerns as citizens  of Taraba State. Looking at the ongoing plunder of our commonwealth under the government of Arc Darius Ishaku, we are calling upon the commission to investigate the management of all loans collected in the name of Taraba State by this current state government. Within 5 years in office, our state debt profile has risen from about N27 Billion to N200 Billion without  corresponding infrastructure on ground to support these loans. According to Debt Management Office, within 9/2020 alone, Taraba State Government borrowed N40 billion without any justification to this debts. 3 flyovers and road projects in Yola Adamawa State was contracted for about N27 billiion, but in Jalingo a single flyover with about 10KM road is gopping more than N35 billion. Why is ours different in Taraba State? Why is every businesses in partnership with the state government cashing out of our scarce resource while our people are abandoned to poverty, insecurity and misery?

The state government have also hijacked the operation of local government council finances, borrowing Billions of naira in their name but abandoning them to abject poverty to the extent that after about one year in office the council chairmen are yet to form cabinet and begin the business of governance to our people. These local government are paid salary quaterly with no pension and gratuity to the retired and beneficiaries of dead staff.. Profession in the primary school as a teacher or in the Hospital as a medical doctor has become a curse looking at the complete abandonment of these critical sector in the business of governance.

Meanwhile, and to our amazement, the governor's private businesses are expanding by day since he was sworn into office. We are aware of the various newly acquired and built property of the governor in Abuja and Kaduna running into billions  of naira within this 5 years in office. We can show the EFCC these property to prove our case and give legitimacy to this petition as being born out of sincerity in the interest of the public. Could it be true that Governor  Darius Ishaku is stealing  the future of Taraba and investing this in his private business and family, yet nothing can be done until it's too late? We the citizens deserve to know why money will be borrowed in the name of government and invested in private businesses of the Governor and his family . Without this investigation, and the appropriate sanctions and recovery, we are afraid that Taraba state do not have a future looking  at the economic plundering going on under this regime.

Economic and Financial Crime Commission was created to protect the interest of the public in ensuring responsible management of public resources and prevent economic saboteurs from having  their way in government. We therefore call on you in matters of public importance to help the citizens of Taraba state who are abandoned to poverty, hardship and misery investigate the government of Arc Darius Ishaku over the loans collected in the name of our state without the corresponding impacts in the lives of the economy and people of Taraba state.  We urge the EFCC to  rise up to its duty to save Taraba's future by ensuring that the State government come clean in its investigation.

Accept the assurances of our highest regards.