HOW BILLION WAS LOOTED IN TARABA STATE POLY 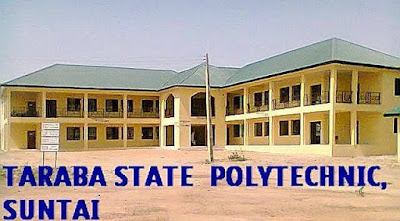 A visitation panel to Taraba State Polytechnic , Suntai set up by Governor Darius Ishaku seems to have uncovered what can be best described as a daylight looting of almost a billion of naira meant for the development of the polytechnic between 2015 and 2019.

The Panel in its report which was exclusively obtained by Taraba Truth and Fact Newspaper showed details of how management led by a former Rector of the institution Mr. Daniel Mom and a former Bursar of the Polytechnic Hon. David Fuoh now a federal lawmaker paid contractors for projects that were never executed; diverted funds were into personal accounts; shortchanged staff of the institution, embezzled students school fees among other gross financial misappropriations.

According to the report Report Indicts Ex Rector, Ex Bursar David Fuoh the school funds are being managed by the Polytechnic management under the leadership of the Rector as Chief Accounting Officer and the Bursar as Chief Financial Adviser of the institution.

However, the Panel was appalled to find out that several instances of misapplication of funds and financial mismanagement and recklessness involving the two key principal officers during their days at the polytechnic.

Another officers of the Polytechnic indicted in the report is the present Director of Works and TETFUND Desk Officer Mr Samuel Ramat Ishaya.

Chairman of the Visitation Panel committee Prof. Nicholas Namessan, while presenting the committee’s report to governor Ishaku in government house Jalingo lamented that Taraba State Polytechnic, Suntai lost an opportunity to be a model of a higher institution in Nigeria, given its modest size and steady inflow of funds through the TETFUND interventions to develop a well-planned institution due to gross financial abuse and mismanagement of funds by the school management between 2015 and 2019.

The report which was exclusively obtained by Taraba Truth and Facts Newspaper shows how over 700 million were misappropriated in the school in five years, with the Panel recommending that the state government should recover them from those indicted and prosecute them.

The report said the polytechnic internally generated the sum of 407 Million in five years also received direct funding from the state government and special grants from Tertiary Education Trust Fund TETFUND for staff development and execution of capital projects in the school.

According to the report, over 30 Million naira payment for staff claims of various services were unaccounted as no document was provided to prove the payments were incurred in the best interest of the polytechnic.

The report also uncovered the sum of 22 Million was released to a company, Capital Express Assurance Ltd. In November 2013 without proper adherence to the provisions of public procurement Act,

noting that no evidence was found for the provision of the service paid for which further reinforced that the contract was a mere conduit to steal funds from the polytechnic.

Also, more than 82 million were indiscriminately transferred to personal accounts of staff of the polytechnic in a bid to circumvent government  policies placing restriction on amount of money that could be withdrawal in a single day.

The report added that over 50 Million withdrawn  from the school TETFUND account could not be accounted for, while over q73 Million purportedly meant for procurement of goods and consultancy services were diverted by management staff of the institution during the years. “While some payments were found to be duplication  of payments already made, some were mere payments for either goods not supplied or service not rendered.

The panel also uncovered that out of over 346 Million  approved and released by TETFUND for the training of academic staff only  311 Million was paid to beneficiating staff of the school, leaving about 34million being siphoned. Also, out of the sum 129 Million approved and released by TETFUND for sponsorship of 25 nonacademic staff of the polytechnic for Research Projects and Manuscripts Publication development only 120 Million got to the beneficiaries with about 9Million going into private pockets of management staff of the institution.

The school management also awarded a contract for printing of security and non-security documents to Printing Trend International and Jossy Vakude Global Concept at the sum of 19,687,000 and 13,997,000 respectively , however the report said available documents at its disposal could not substantiated that the contracts were executed as there was no evidence of execution and delivery of such items to the polytechnic.

About 22 Million naira tax deducted as Value Added Tax VAT and Withholding Tax WHT in the five years were not remitted to relevant tax authorities and could not be accounted for according to the report. Also the panel discovered that fees from students of the Polytechnic at Suntai campus were deliberately  collected on cash basis to create loopholes through which revenue could not be fully accounted into coffers of the Polytechnic.

“Why this unaccepted practice is allowed in the  Polytechnic can only mean consent from management to allow persistence of control weaknesses despite of the presence of online payment portal provided by a software developer at a very high cost to the Polytechnic.

School fees were collected by cash and embezzled at the polytechnic.” However the state government is yet to implement the recommendations of the visitation panel submitted October last year but recently appointed a governing council for the

The U.S. Agency for International Development (USAID), in partnership with a coalition of international and local partners, Wednesday, successfully concluded a community-driven conflict mitigation intervention to restore peaceful coexistence among herders and farmers in vulnerable communities in Taraba state.

The activity tagged: Engaging Local Actors to Promote Peaceful Coexistence among Farmers and Herders in Taraba State (ELAPC) focused on ten communities across four local government areas in the state where violent conflict had damaged relationships along ethnic, political, and religious backgrounds.

A press statement by the agency, Thursday in Abuja, said: “Over the last two years, ELAPC brought together more than 3,600 representatives of farmers and herders, Muslims and Christians,  women and youth, as well as people living with disability, to 11 identify and address the drivers of the conflict and adopt inclusive

strategies to reduce a culture of violence in the communities.

“This activity has made a real difference for peaceful

ELAPC engaged 600 members of Christian and Muslim women’s groups to mediate divisive issues between farmers and herders such as encroachment onto farmland and destruction of crops, to help reach amicable, non-violent resolutions and settlements. Women, men, and youth acted as community peace observers, and women served in other critical roles like providing psycho-social support to other women traumatized by conflict.

According to the statement, culturally familiar “mediation tents” in partner communities helped strengthen parameters of justice at the local level, giving farmers and herders new confidence in fair and swift resolution to their grievances at no cost, and successfully de￾escalating tension and conflict in dozens of cases between farmers and herders.

“This intervention resulted in an overall reduction in the reported frequency of violence in the ten partner communities, peaceful planting and harvest seasons, and introduction of cultural activities shared between herder and farmer youths,” the agency further stated.

“I want to thank the American people for choosing Taraba State for this pilot project. We have new capacity to address land issues and promote peaceful coexistence in our communities.

“The Taraba state government will ensure this project’s gains are sustained by providing support to continue these practices,” said the Commissioner of Humanitarian Affairs and Special Duties, Taninga Paninga Binga, who represented Governor Darius

Ishaku. Farmers Herders Crisis: Taraba, USAID Partner To Promote Dialogue Between Parties Continued From Cover Page A youth group, Sardauna  Youth Peace Vanguard has lambasted a former Speaker of the Taraba House of Assembly Abel Peter Diah and the immediate past National Vice Chairman of the PDP northeast Barrister G.T Kataps for insinuating that the late third class chief of Mbamnga Chiefdom Amb. Emmanuel Njiwah was frustrated to death by the state government.

The youth group who described the insinuations as baseless and unwarranted said that the duo couldn’t wait for the completion of the late traditional ruler’s funeral rites before picking political fight and inciting the people of Mbamnga Chiefdom against the Governor Ishaku’s led government Reacting to the comments made by the duo at the funeral recently, leader of the youth group, Mr Larry Changko, said that the “the duo’s malicious activities frustrated and killed HRH Amb. Njiwah but they now turn around to blame the same government that even sponsored a befitting burial for the late traditional ruler.”