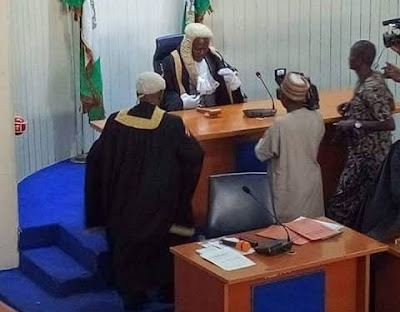 The Taraba State House of Assembly on Wednesday passed the Violence and Discrimination Against Persons Prohibition Bill (2021) into law.

The new law proposes the death sentence for anyone who has carnal  knowledge of a child and life imprisonment for transgenders in the state.

The sponsor of the Bill and Speaker of the state House of Assembly Dr Joseph Albasu Kunini, said that as leaders the House members have a moral responsibility to protect the public from gross moral decadence that is quickly engulfing the world with grave consequences.

Kunini said that ‘children who are most vulnerable and susceptible to devices of psychopaths and moral degenerates must be protected at all cost and I assure you that the House would do everything to protect them and other vulnerable sections of the society.

‘Today, I feel highly elated that after painstaking and elaborate consideration and panel beating, this Bill has now become a law and has given us a legal instrument that would protect the people against violence and discrimination in line with emerging trends a d current realities. This is a revolution in Taraba State.

‘One of the most beautiful thing about this law is that it is able to tackle issues that existing laws did not address or were not sufficiently covered, thereby making it easier for the relevant authorities to give justice to those who feel violated or discriminated against.’

Part of the recommendation of the committee read that ‘anybody who has a canal knowledge of a minor shall, upon conviction, be sentenced to death. If the offender is less than 14 years, they’ll be sentenced to a term of not more than 14years.’

Other provisions of the Proposed Bill include provision for jail term for digital harassment, attempted rape, incest and other violence and discrimination against persons.

Daily Sun has reported  that Mr Mark Useni, Chairman, House Ad Hoc Committee on Public Hearing on the Taraba State Violence and Discrimination Against Persons Prohibition Bill (2021), while presenting the report of the committee on the floor of the House on Tuesday, said that the Bill has generated the highest level of interest in the state in recent times and noted that the report and recommendations made by the committee were a reflection of an elaborate interaction with critical stakeholders and members of the public.