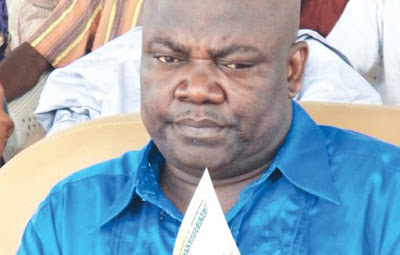 Some members of the Taraba State chapter of the Peoples Democratic Party (PDP) have called on the PDP Caucus in the Senate and the party’s National Working Committee (NWC) to replace Senator Emmanuel Bwacha as the Deputy Minority Leader of the Senate over alleged anti-party activities.

The party members also called for Bwacha’s suspension from the party from Ward to the State level in Taraba, alleging that the lawmaker was polarising the PDP ahead of his alleged defection to the All Progressives Congress (APC).

In a letter to the PDP national chairman, Prince Uche Secondus, they alleged that Senator Bwacha had been using his influence and perks of office as a Deputy Minority Leader of the Senate to cause confusion in the state chapter of the party and infighting among members.

The letter jointly signed by Oliver Tailon Adi, Bako Tsokwa and 53 others, said “The only thing keeping Bwacha in PDP is the Deputy Minority Leader seat which he has been using against the interest of the party in Taraba State. Senator Bwacha is now an APC member in Taraba State, he has appointed himself as the number one critic of a PDP government in his state because of his inordinate ambition.

“Today, Bwacha represents the interest of APC both in Taraba and Nigeria at large, his commitment to the ideals of the PDP has been thrown into the bin because of his gubernatorial ambition. He doesn’t represent the PDP any longer.

“Bwacha has deliberately ignored the PDP congresses from ward to state, all stakeholders and reconciliation meetings of the PDP both in the State and Senate because of his newly found alliance with the APC.

“He also directed his supporters in the Southern Zone to participate in the APC registration and now attends the party’s meeting,” the PDP members alleged.

They also urged the PDP State Executive Council to immediately communicate reasons for his replacement as the Senate Deputy Minority Leader to the PDP NWC and initiate his suspension from the party from Ward to state level.

“It’s wrong for Bwacha to be leading Senators of a party he’s working against.

“We opposed the continuous reign of Senator Emmanuel Bwacha as the Deputy Minority Leader in the National Assembly, we are aware of his grand ploy to ensure PDP lose Taraba State in 2023, we are also aware of his various meetings with APC leaders and Stakeholders both from Taraba State and across the country. Bwacha home in Abuja now hosts APC stakeholders meeting which he sometimes presides over,” the PDP members said.

The aggrieved members claimed that Senator Bwacha is using his privileged office as the Deputy Minority Leader to de-market the party and promote disunity among PDP members in the state.

Through a petition submitted to the party Secretariat in Taraba State, the aggrieved members said that the senator’s alleged governorship ambition, if not tamed, could further polarise the party and affect its chances during the 2023 gubernatorial election.

According to them, the ranking lawmaker has been alleged to be involved in several anti-party activities in his desperate bid to emerge as the governorship candidate of the APC in 2023 and this is a clear danger to our party even being the ruling party.

They urged the party stakeholders to immediately put machinery in motion to checkmate Bwacha’s activities and protect the party from being rejected by the electorates during the 2023 exercise.

The aggrieved members said that since the office of the Deputy Minority Leader is zoned to Taraba State PDP, Senator Bwacha no longer serves the interest of PDP and thus be relieved of the position.

But attempt to speak with Senator Bwacha proved abortive as his phone line was switched off at press time.