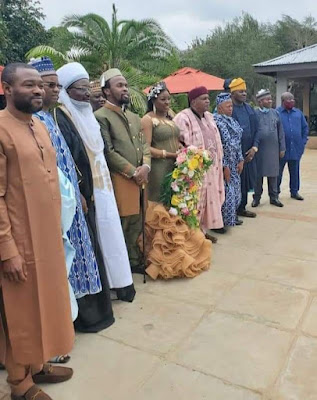 Taraba State Governor, Arch Darius Dickson Ishaku at the weekend attended a wedding ceremony of his nephew in Kenya with a large entourage of about 40 people.

The entourage consisting of close family members, the Secretary to government, about four commissioners, political aides, traditional rulers and lawmakers from the state house of Assembly attended the ceremony held at Carnivore Nairobi.

Taraba Truth and Facts checks revealed that the Kenya trip could have cost the Taraba State Government about N30 MILLION on air fare only, as a return ticket from Nigeria to Nairobi, Kenya cost averagely about N800,000 while estacode in hundreds of thousands were given to the wedding guests.

This newspaper gathered that the fund for the trip was provided by Taraba State Water and Sewerage Corporation, TAWASCO and the State government.

A close government source said all board members of the state water agency with management staff attended the wedding in Kenya alongside a three days leadership training for management of TAWASCO at Carnivore Nairobi.

“What is the relevance of the Commissioner for Youths in management of TAWASCO? The workshop was hurriedly put in place to justify their attendance of the wedding ceremony and maybe fund their visit to Kenya,” close watchers said.

“The government must have spent about a hundred million in Kenya, because the governor and his entourage will lodge in hotel and each were given money, although a half of the team returned on Monday after the wedding ceremony there is no justification for the wasteful spending at a time government is trying to reduce high cost of governance.”

Taraba Truth and Facts gathered that some of the politicians who funded their trip personally to Kenya wanted the rapt attention of the Governor.

“They believed they could use the trip to get the Governor’s full attention to discuss politics of 2023, some major political decisions about the political affairs of the state would be discussed.”

When contacted, spokesperson to Governor Ishaku, Bala Dan Abu, said that the visit to Kenya was private and not funded by the state government.

However at a lavish dinner in Kenya, Commissioner Youth and Sport, Hon. Ibrahim Adam Imam “appreciated the State Governor for finding him and other commissioners worthy to embark on this automated journey to bring back success and positive results for the betterment of the good people of Taraba state at large.”