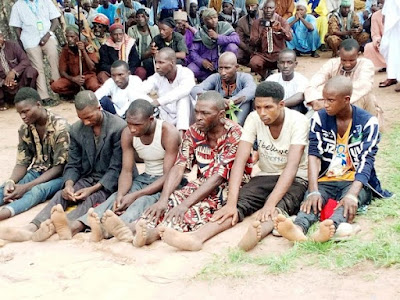 The leadership of Miyetti Allah Cattle Breeders Association of Nigeria, MACBAN has begun a new synergy with the law enforcement agencies, aimed at fighting insecurity across the country.

The leadership of the association on Sunday handed over 11 suspected kidnappers and gun runners to the Taraba State Police Commissioner, Mr Abimbola Sokoya, at Maraban kunini, according to Daily Trust.

The suspects were presented during the formal inauguration of a 16-man committee set up to tackle criminal activities, especially kidnapping.

The chairman of the MACABAN in the state, Sahabi Tukur, said  this was done in response to pledge made before the Emir of Muri, Alhaji Abbas Tafida, and state Commissioner of police that they will expose criminal elements among them.

He said the committee members drawn from all the Fulani clans in the state would work along with police and other security agents in all the 16 local government areas  of the state to fish out kidnappers and other criminals.

The police commissioner commended the Fulani for their resolve to address kidnapping and other crimes being perpetrated by bad eggs among them.

He also called for collaboration effort between Adamawa, Benue and Taraba states in tackling kidnapping and other criminals activities.

He assured the Fulani of his command’s support to the command support  in  their efforts to weed out criminals elements among them.

Similarly, six kidnappers have repented  and have sworn with the Holy Qur’an that they would not engage in kidnapping, Cattle rustling or any other form of criminals activities anymore.