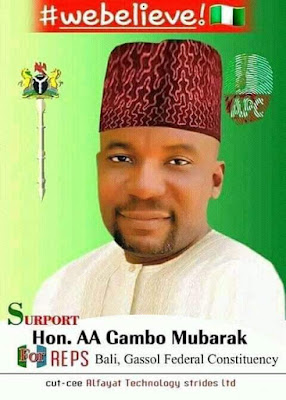 Justice Ahmed Mohammed of an Abuja Federal High Court has ordered the withdrawal of the Certificate of Return (CoR) issued by the Independent National Electoral Commission (INEC) to Hon. Abdulsalam Gambo Mubarak as member of House of Representatives, representing Bali/Gassol federal constituency of Taraba State.

Consequently, the court ordered the Speaker of the House of Representatives, Hon. Femi Gbajabiamila and the clerk of the House to swear in the applicant, Hon. Garba Hamman Julde, who was earlier declared the winner of the 2019 election by INEC, as a member of the House representing the Bali/Gassol federal constituency pending the determination of the substantive suit.

In the court order dated September 30, 2020 obtained by LEADERSHIP, the court also restrained Hon. Mubarak from further acting as a member of the House of Representatives representing Bali/Gassol.

Meanwhile, both INEC and the leadership of the House of Representatives have refused to heed the subsisting court order in favour of Hon. Julde, hence the court has ordered for a substituted service of its processes, namely Motion on Notice and the Order of the court, dated September 30 and 29 respectively, on the 5th Respondent, Hon. Abdulsalam Mubarak.

This is also after interventions by the Minister of Justice, Abubakar Malami (SAN), through letters to the chairman of INEC, asking the Electoral umpire to redress the anomaly and injustice against Hon. Julde but the legal advice was also ignored.