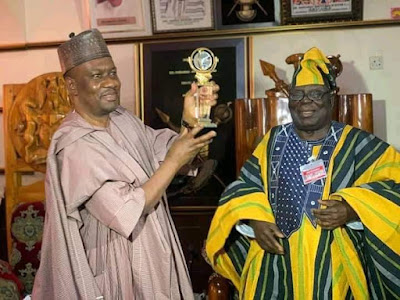 The foundation was founded since 2004 by His majesty Dr.Shekarau Angyu Masa-ibi,CON Kuvyu II-Aku Uka In continuation of his effort aimed at ensuring that everyone in Wukari and it Environ has access to quality and affordable Education which leads to the establishment of Kwararrafa University.

The foundation has already sponsored more than 100 undergraduates,2 postgraduate students and distribution of goodies during festive period and many.

The award recipients at the event are: His Excellency Arc Darius Dickson Ishaku,Gen.TY Danjuma,Sen.Emma Bwacha,chief David Sabo Kente and many prominent Nigerians who contributed massively in building the foundation.

Similarly,His Excellency The Deputy Governor of Taraba state Eng Haruna Manu inspected the mini Army Barrack builded by the state government at Shunku a border community in Wukari so as to strengthen the Security architecture of Taraba-Benue Border.

Senior special Assistant to the Deputy Governor of Taraba state.