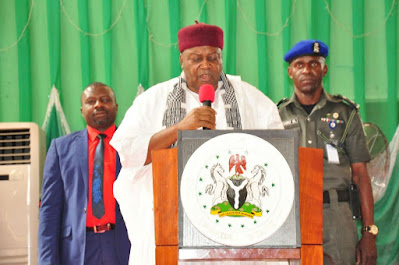 Taraba State Governor, Arc. Darius Dickson Ishaku has advised the people of the state to remain steadfast in their support for his administration’s battle against insecurity, COVID-19 and economic challenges facing the state today. He wants them to be hopeful as the administration is determined to take steps that will bring alot more succour for them.

In his New Year message to the people of the state, Governor Ishaku congratulated them for surviving the scourge of Covid-19 pandemic and the economic hardships that came with it.

He attributed the low rate of Covid-19 infections and zero fatality in Taraba State to his government’s aggressive combat strategy and the cooperation of the people.

He assured that government’s proactive measures that have so far proved effective in containing the spread of the pandemic in the state would be further energised in the new year.

He urged the people to play their own role by fully embracing the protocols for checking the spread of the pandemic.

Governor Ishaku said government has done alot to reduce poverty in the state through the promotion of agriculture and skills acquisition for women and youths.

Government’s rice production policy has been highly successful and has made life easier for both rice farmers and consumers. Recent widely quoted national statistics have indicated that the price of locally produced rice is presently most affordable in Taraba State than in any other state in the country. This is the result of the boost which rice production has received through the support for rice farming by the present administration in the state.

Governor Ishaku assured that all ongoing road projects in the state, including the Mararaba-Baissa-Abong and the dualization of the Jalingo Airport road which also comes with a flyover bridge would be completed before the end of his tenure.

He expressed happiness about the level of peace that now reigns in the state and urged the people to join the Government in the effort to sustain it.

He said government remains unequivocally committed to the pursuit of peace and would not relent in its desire to ensure safety of lives and property.

The New Year provides an opportunity to reflect on the past, correct past mistakes and make new positive resolutions and projections about the future.

He urged the people not to allow the lessons of 2020 elude them but to allow those lessons and experiences guide their actions and decisions aright.

He urged them to forgive one another and to make peace with their neighbours as they begin the new year.

He wished them a happy and prosperous New Year.