JALINGO LG BOSS DECRIES LEVEL OF DESTRUCTION CAUSED BY CRIMINAL ELEMENTS AT THE WATER BOARD AREA OF JALINGO. 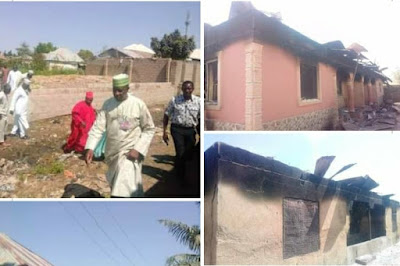 Chairman of Jalingo Local Government Area, Hon. Abdulnaseer Bobboji has decried the destruction of properties in Jalingo by a crisis caused by criminals yesterday.
Bobboji condemned the action while conducting newsmen round the vandalised infrastructure today at the water board area of Jalingo LGA.
The council boss embarked on the visit immediately after he held a security meeting with all stakeholder's at the Jalingo Local Government exco chamber where he set up a committee to fish out the perpetrators of the act.
It was gathered that several houses were burned down in the area last night following a misunderstanding between two guys fighting over a lady which left one person dead.
Tension however brewed in the area when the crisis took a religion colouration, however, proactives measure have been put in place to ensure that normalcy was restore.
Bobboji finally appealed to all Jalingo residents to remain calm as security commitee have been set up to overrides worsening the situations and bring all perpetrators to book.
Also, burnt were religion worship centres, houses and business centres e. t. c.
© Habu Ardo.