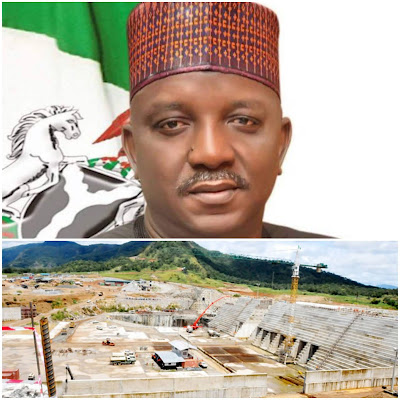 Minister of Power, Mr Sale Mamman , has stated that the federal government revoked the $2.3 billion Mambilla hydropower project contract with Sunrise Power Transmission and Procurement Company Limited (SPTPCL) because the government found out that the company was ‘fronting’ for a foreign business organisation.

The cancellation of the deal has been a subject of controversy as the firm has recently dragged the government to an international arbitration court claiming several millions of dollars for breach of contract, thereby stalling the project which is over 40 years in the works.

In June, the company filed a fresh $400 million lawsuit at the International Court of Arbitration (ICA), which operates under the auspices of the International Chamber of Commerce (ICC), in Paris, France, against the federal government.

Sunrise Power had earlier on October 10, 2017, dragged Nigeria to arbitration at the court seeking a $2.354 billion award in relation to the deal before both parties agreed on an out-of-court agreement on the 3,050MW plant in Mambilla, Taraba state, on a “build, operate and transfer” basis.

In a piece he titled “ Power Sector and its Desperate Critics”, Special Adviser, Media and Communication to the minister, Aaron Artimas, the minister also defended his qualification for the position he currently occupies, noting that people like one of his predecessors, Prof. Barth Nnaji would have transformed the ministry if performance was based on paper qualifications.

In the lengthy treatise which he made available in Abuja, he stated that he inherited a very chaotic ministry when he took over the ministry, but had to “whip the agencies into line” because each of them was claiming autonomy. Mamman succeeded Mr Babatunde Fashola, who is now Minister, Works and Housing.

“As background information, the Mambilla Power project was previously awarded to a local contractor, Sunrise Power Transmission and Procurement Company in 2003 at a cost of $2.3 billion. But as it turned out, the company was merely fronting for a foreign company.

“Under President Muhammadu Buhari, the ministry of power, during Babatunde Fashola’s tenure, decided to deal directly with Sinohydro, the Chinese Company engaged by Sunrise. Sunrise then took the federal government to the International Chamber of Commerce Court of Arbitration in France, since the project would be financed by the China Eximbank,” the minister said.

However, he noted that last year, Sunrise accepted a settlement of $200 million as settlement agreement, which he admitted that the federal government is trying to pay, so as to free the project from any encumbrances.

He said that while the ministry of power has gone very far in collaborating with the Taraba state government to secure the project site, Buhari has also directed the Nigerian Sovereign Investment Agency (NSIA) to re-evaluate the scope of the project, so as to make it less cumbersome and bankable in order to facilitate easy foreign financing.

He disclosed that the dam will be scaled down to N1,500MW instead of its previous status of 3.050MW to reduce the cost and period of execution.

The release stated that Mamman remains the only minister to successfully move the Mambilla Power Project from the drawing board, noting that before now, no government or minister had taken the first step of acquiring the land, let alone commit the host communities and the state government towards starting the project.

He argued that if previous regimes had played their own part, Nigeria shouldn’t s be talking about land at this stage, saying that the anticipated area of coverage is about 25kilometres radius, which cannot be covered in a couple of months.

According to the piece, a transmission record of about 8,000MW through infrastructural improvement, distribution of electricity had been reached, while the generation capacity has increased to 13,000MW from 8,000MW in 2015.

He urged Nigerians to be aware that the country’s decision to divest 60 per cent stake into the Distribution Companies (Discos) in 2013 was greatly flawed, with the government now paying for unused or undistributed power through the Nigerian Bulk Electricity Trading Limited (NBET).

“This situation has created a huge liability since failure to subsidise means increase in tariffs by distribution companies. The government has also stepped in to provide about six million meters, a responsibility which the Discos also accepted when they bought the companies.

“It may be the reason, Engr. Sale Mamman may not be popular to some. When he assumed duties he met a ministry that was almost uncoordinated as many agencies under the ministry claimed some measure of autonomy and they gleefully told him so. It took tough measures to whip them into line,” the release stated.

On criticisms that Mamman is not fit for the post, it declared: “ If heading and delivering the mandate of the ministry of power, is about endless paper qualification, Barth Nnaji, a Professor of Engineering as well as other eminent technocrats and professionals in other fields have headed the ministry, why are we here today?”

The document stated that the job of the minister is to drive policies and supervise the technical staff and professionals, noting that while he may take personal responsibility for success or failure, the civil servants have greater role as professionals to ensure successful execution of government policies.

Mamman has recently come under heavy criticisms for non-performance as the power sector continues to remain in doldrums more than six years into the Buhari administration as well as being perennially reclusive.