The Taraba State Government had awarded the company a contract for the satellite survey and analysis of hydrocarbon feedstock deposit of Benue valley territory of the state. 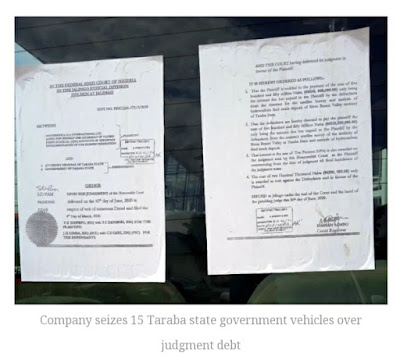 A company has seized 15 vehicles of the Taraba State government following a court order over a debt owed the company.

The company, Waterwells N.A International, obtained the order at the Federal High Court in Jalingo, the state capital.

The court also issued a writ of attachment and sale of goods order against the Attorney-General of the state to implement a judgment given by the court on June 10, 2020 over a N550 million debt.

The debt is with respect to a contract the government awarded the company for the satellite survey and analysis of the territory of hydrocarbon feed stock deposit of Benue valley territory of the state.

In the event of the government defaulting to pay the debt, the court allowed the company “to take control by sale of goods and chattels of the defendant, wheresoever they may be found within the federal high court’s jurisdiction.”

A copy of the court order was made available to PREMIUM TIMES by the company.

A writ of order is a document issued by a court for the purpose of effecting court judgment on a debtor’s property. It is also the legal instrument by which the asset of a judgment debtor may be seized.

PREMIUM TIMES gathered that it was in compliance with the judgment that some vehicles belonging to the state government were seized and kept in the custody of the court.

Our correspondent gathered that there are also about 10 other vehicles kept in an undisclosed location due to lack of space in the court premises.