Taraba government under fire over sale of employment forms 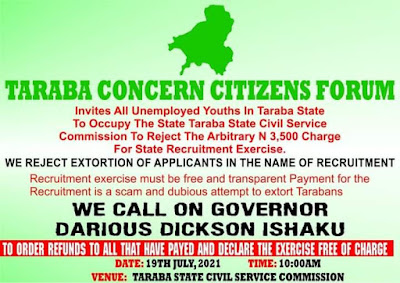 The Taraba State government has drawn the anger of indigenes of the state over the ongoing sale of forms to applicants who seek to work in the state’s civil service.

The state government a few weeks ago lifted an embargo on employment into the state civil service through an announcement by the Office of the Head of Service of the state.

Subsequently, the state’s Civil Service Commission (CSC) directed interested indigenes to apply by obtaining an online application form at the cost of N3,500.
The commission also directed workers who want to transfer their services from local government to the state service or across ministries, departments and agencies to also obtain a transfer of service form by paying N3,000 to the state government’s account with Zenith Bank.
The government had conduced a similar employment exercise in 2017 but less than 10 per cent of the over 30,000 applicants were employed.
Premium Times gathered that mostly applicants with government connection got employed in the 2017 exercise from which the government raked in over N100 million from the sale of forms.

That experience has fueled a suspicion that the current exercise is another ploy by the government to generate revenue from people desperate for employment.

The suspicion is butressed by the fact that the state government has not been paying gratuities and pensions to retired workers while payment of salaries of civil servants is not regular.

A former chairman of the Nigeria Labour Congress (NLC) in the state, Jonah Kataps, described the sale of application for employment forms as unfair.