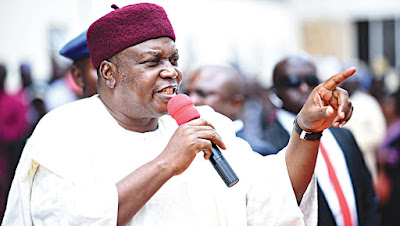 1. The Governor gave money to four strong politicians in the north to divide their votes, he first of all asked Hon. Victor Bala Kona to contest, he then persuaded Hilkiah Bubajoda , he then persuaded Hon. Alkinjo kunini the current speaker and now The Accountant general of the state Hon. Aminu Kotolo

2 In the the case of Kotolo, Hilkiah and Alkinjo these are deliberate attempt to stop Victor Bala Kona from becoming a threat to Barrister Damian Dodo SAN because of the agenda it's made up to pave a way for Damian Dodo SAN.

3. Kotolo's endorsement is for him to resign and give a southerner a chance to takeover the treasury of the state so that there is going to be a synergy in syphoning and financing the southern agenda campaign without accountability.

4. All the contestants from the north cannot see the light at the end of the tunnel because of the already orchestrated manipulation vested by the governor.

5. If the endorsement is true, the Aminu Jika's committee wouldn't have recommended an open playing ground for all the candidates because zoning would have been the priority of the committee.

6. The Governor wants the northerners to participate in the primaries so that he can have excuse that there was a level playing field, but the truth of the matter is that Damian Dodo has been anointed to succeed DDI.

It's left for us the northerners and central zone to form an alliance irrespective of party to form an inclusive governance that will end this existing dominance and maladministration.