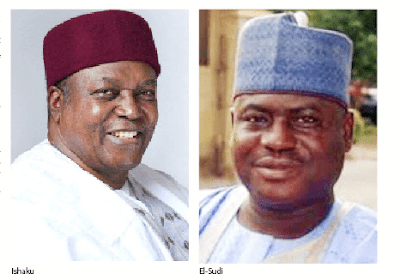 Aspirants have commence efforts through different political parties to clinch to the number one seat of Taraba state.

Not fewer than Seven aspirants have purchased nomination forms and indicate interest to fly the governorship flag under the platform of People’s Democratic Party PDP in Taraba state.

LEADERSHIP Sunday gathered that more are jostling to do same in the main opposition party in the state, the All Progressive Congress APC and other political parties.

Oldest among the seven contestants in the PDP is Sen. Joel Danladi Ikenya.

Sen. Ikenya was elected to represent the People’s Democratic Party (PDP) as Senator for Taraba South  in 2007.

He then in 2011 made an unsuccessful bid for governor of the state. Senator Joel Danlami Ikenya was nominated as a ministerial nominee to replace Darius Ishaku who resigned to contest for the Governorship election in Taraba State. In January, he was appointed the Minister of Labour and Productivity till May 2015

Sen. Ikenya from Wukari local government area in the southern part of the state where the present governor Ishaku is held from may not be favored by zoning according to the party instructions, though he has chances of winning the party governorship ticket having been close to the grassroots and the structure of party for years.

Another PDP governorship aspirant from Wukari local government area is Demien Dodo, a Senior Advocate of Nigeria SAN who base in Abuja.

Dodo has never been in touch with PDP or participated in any political activity to have proven his weight to win any level of primary election in the state.

Some political analysts in the state while speaking over the declaration of the SAN to contest for the state governorship were rather confuse especially when posters for his ambition were displayed on the streets of Jalingo, Taraba state capital and other selected areas in the state.

The recent past Taraba state chairman of the PDP Chief Victor Bala Kona, held from Ardo-Kola local government area in the northern part of the state is also fully in the contest.

Kona who organize all the congresses of the party where all the ward, local government and state executives of the party were installed before handing over to his successor is hopeful of riding on the already established relationship with the delegates during the forthcoming PDP primary election.

Kona is said to have earmarked much wealth better than any other PDP gubernatorial aspirant in the state to execute his governorship ambition.

Though recent report have it that Kona who enjoyed smooth relationship with Governor Darius Ishaku of the state long ago is suffering a set back, insiders who spoke to LEADERSHIP said the governor has recently hinted Kona to back down his governorship ambition.

The move by the governor to dump Kona according to sources was a preferred choice and the recent romance between the governor and the speaker Taraba State House of Assembly and member representing Lau state constituency Hon. Joseph Albasu Kunini.

Kunini, the speaker Taraba state house of assembly was a close political associate to the Kona, he quietly traveled and secretary purchased the governorship nomination form in Abuja very unusual someone who is vying for the seat of a governor.

Kunini who is also from the northern zone of the state is said to be the preferred candidate of the governor among all the contenders, a source who refused to be quoted said Kunini bought his nomination form under the instructions of the governor.

Those who visited the recent past PDP chairman of the state Bala Kona of recent said while in a discussion, Kona express disappointment with the actions of Kunini who is more of a political son to him by purchasing nomination form to contest election again his ambition.

Before the show of interest by Kunini, the former chairman Taraba State Universal Basic Education Mr. Hilkia  Buba Joda, from Karim local government in the northern part of the state was the first to have indicted interest to run for the ticket of PDP within the northern zone of the state.

Mafindi who also served as the chairman Taraba State Budget and Planing Commission under Governor Darius Ishaku was perceived to be an anointed candidate of the governor in the party.

A well polish gentle man who is determined to succeed in his political career has excellent records accross all the juicy positions he served within the last over 10 years of his services.

Prof. Jerom Nyame, a younger brother to former governor of Taraba state Jolly Nyame from Zing local government in the northern part of the state also purchase the PDP govership form to run for the seat.

Latest in the race is the Accountant General of the state Aminu Kotolo from Karim-Lamido local government area also in the northern part of the state.

Kotolo’s nomination form was directed be obtained by the state chairman of the party Col. Agbu Kefas at Wadata Plaza by Governor Darius.

Many media houses reported earlier that Kefas, the state PDP chairman bought governorship nomination form to contest for the seat, LEADERSHIP reliably gathered that Kefas bought the under the directives of the governor for Aminu Kotolo.

The form which PDP chairman bought at Wadata Plaza was for Aminu Kotolo not for himself, the form has been well filled under the instructions of the Governor, he has also directed that all should be done to ensure that Kotolo wins the governorship primaries.

Insiders in the cycles of power who spoke to our correspondent in the state said,  in a meeting between stakeholders of the party on and the governor on Thursday at government house Jalingo, Governor Ishaku anoited Kotolo and asked all the party structures to ensure his victory during the governorships primary elections.

Kotolo was out of reach as at the time of the story to confirm his involvement in the race to become governor of the state.

As the time, Chief David Sabo Kente of the All Progressive Congress APC was also in the state capital to inform the state working committee of the party of his intention to vie for the governorship of the state.

Kente who is also from Wukari will be rocking horns with Sen. Emmanuel Bwacha who recently defected from PDP to APC, Bwacha has not visited the state to confirm his ambition to the people, though LEADERSHIP reliably gathered that arrangement is on top gear for the Senator’s governorship declaration.

The likes of Sen. Yusuf A. Yusuf, Sani Abubakar, Prof. Sani Yahaya and Bar. Kabiru Dodo are the serious contenders for the seat in the APC.