on December 07, 2015
Immediate past Governor of Taraba State Danbaba Danfulani Suntai was on October 25, 2012 involved in a plane crash. He piloted a plane that crashed in a tree at a suburb of Yola –the Adamawa state capital.
Suntai was on board the ill-fated Cessna 208 aircraft with three of his aides: his Aide-de- Camp (ADC), Iliya Dasat, the Chief Detail, Joel Danladi, and the Chief Security Officer (CSO), Tino Dangana. Some media, particularly the social media, reported they were all perished! But they all survived, perhaps, by divinity. 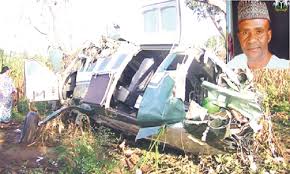 Accolades must be given to the former Governor of Adamawa State, Murtala Nyako, for his prompt intervention. Nyako rushed the injured governor and his aides to the hospital in Yola. The following day, Suntai was taken to Abuja from where he was flown to Hannover, Germany, from where he was much later evacuated to the United States (US).
Suntai left behind a deputy, Garba Umar who was sworn on October 5 –only twenty days before the crash. Soon, the battle for succession took the centre stage, with intrigues, scheming and back stabbing. Umar, popular as UTC, was at the centre of the controversy. He wanted to become the substantive governor by removing his benefactor on health grounds, or to succeed him at the general election. This was hotly resisted by those close to Suntai, who wanted power to rotate to the southern geopolitical zone of the state. 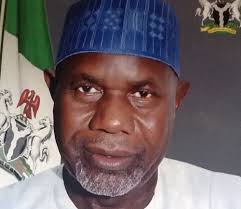 At first Umar appeared to be uninterested to holding power. He cautioned his allies that it was wrong for him to betray his principal. He once stated that through providence he became the deputy and acting governor, and was contented that, as acting governor, he was exercising the powers of the governor as prescribed by the constitution. But, some party chieftains accused him of pretending. They demanded answers to why he changed the leadership of the state Assembly and sacked Suntai’s loyalists on allegation that they feasted on the N400 million federal government intervention funds for flood affected persons.
The battle of wit peaked when 10 months after, an ailing Suntai returned on Sunday August 25, 2013, from his medical trip abroad and was not fit to resume work as the helmsman. His deputy refused to revert back to his constitutional position as a spare tyre. 16 of the 24-member House of Assembly had backed the acting governor, rejecting a letter purportedly transmitted them by Suntai intimating them about his intention to resume office. The House alleged that the letter was forged. The late Speaker, Haruna Tsokwa, had proclaimed Suntai as sick, adding that the House would not allow him to toy with the destiny of the state. Ironically, Tsokwa later slumped and died of heart ailment and another loyalist of the acting governor, Josiah Sabo Kente, took over as the Speaker.
Eight lawmakers, however, rejected the ceding of power to Umar to steer the state. There was a constitutional puzzle that required judicial interpretation. The court was approached by Suntai’s lawyers to interpret Section 190(2) of the 1999 Constitution, which deals with the transmission of letter by a governor to the House. The case was a novelty in Nigerian laws since no precedence had been set on a similar issue.
Tension was fueled more when a fragile Suntai, who refused to release his medical records to the public, purportedly dissolved the cabinet and appointed a new Secretary to Government and Chief of Staff. Umar cried foul, saying a cabal was desperate to hijack the machinery of government using Suntai’s name, which he would not tolerate. He insisted he would not revert to the position of deputy governor, until the House of Assembly, which made him the acting governor, communicates to him the change in status. He was not ready to play the second fiddle again.
Two major camps had already formed, and ahead of the 2015 general elections, the camps of the former governor and his deputy who was holding the forte spoiled for war.
Efforts to resolve the crisis out of court failed, and the succession drama continued to play out. With majority of the lawmakers in his kitty, Umar systematically asserted himself and began to prepare himself for power, although still walking a tightrope. He kicked against power shift and fired Suntai’s loyalists from office and embraced his boss’ foes, as he plotted to remove him on health grounds.
Umar and his supporters were called betrayers by those who did not want Suntai impeached. But the Umar camp saw their opponents (Suntai loyalists) as the enemies of progress. Sometimes they poured venom on former Defence Minister General Theophilus Danjuma, former Governor Jolly Nyame, Senator Emmanuel Bwacha and Emmanuel Bello who was the Commissioner of Information, alleging that they were “obstructing the government and sabotaging Umar.” These leaders insisted on the rule of law and due process why Umar and his group insisted that Suntai was incapacitated to carry on, despite supremacy of the law.
Abubakar Sani Danladi who was Suntai’s running mate in 2007 and 2011 had been on October 4, 2012 impeached by the state Assembly, allegedly at the prompting of Suntai, which paved the way for Umar to come on board. But Danladi asked the Supreme Court to reverse his impeachment. The High Court in Jalingo and the Court of Appeal in Yola had affirmed the impeachment, but Danladi’s lawyer, Kanu Agabi, SAN, proceeded to the Supreme Court to argue that the House of Assembly did not follow the due process in removing his client.
In the end, Taraba state returned to stability when Justice Sylvester Ngwuta, among six other judges of the Supreme Court sacked Umar and Danladi was reinstated as Suntai’s deputy on November 21 last year. Danladi, now a senator, returned as acting governor and worked in partnership with the Suntai camp in the remaining six months of the Suntai administration. He also supported and aided power shift to the south of the state which was the major cause of the political crisis.
The political conflict took many fronts, including the constitutional battle, but Bello being a journalist, wrote more on the media warfare of the crisis.
He said: “As the one superintending the Taraba state’s information machinery at that time, I found myself enmeshed in many of the political battles that arose after Suntai’s plane crash. It was at the level of the media that I really got involved.‎
- The Nation
‎
‎