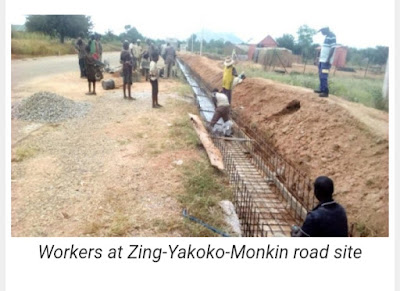 The contractor handling Zing-Yakoko-Monkin road in Taraba state has returned to site seven years after abandoning the project. The Federal Ministry of Works and Housing has in an advert recently threatened to revoke the contract if the  contractor failed to return to site.

North East Trust correspondent, who visited the project site handled by Munir industries Trade Nigeria Limited, discovered that men are working on the reinforcement of drainages on the road.

Similarly the Yard constructed by the contractor along the project site outside Zing town, which was over grown by grasses, has been cleared and construction materials brought in by the contractor. The project Director, Engineer Ahmad Shehu told North East Trust that they have returned to site and commenced work. He said  they would  start earth moving work  and equipment will soon be brought in.

Engineer Ahmed Shehu further stated that the total length of the road project awarded to the company was 7.0 kilometers at the cost of N1.043billion and not the N41.045 billion being alleged. “How can a contract of 7.0 kilometers be awarded at N41,043,029,722.40,” Engineer Ahmed asked.

However, a document obtained by Daily Trust from Federal ministry of works showed that the road  project was awarded in 2012 at the cost of N41,044,029,722.40. Meanwhile the communities in the area have welcomed the resumption of work on the road.

He called Federal government to set up committees to visit project sites especially those located in the rural areas to see  if the projects were executed or not.