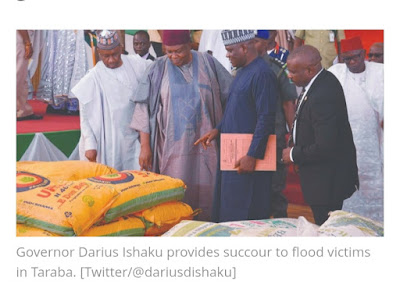 The Taraba state Government on Sunday distributed relief material to victims of the recent flood disaster in Dampar community of Ibi area council of the state.
Mr Bala Bako, the Caretaker Committee Chairman of Ibi, distributed the items in Dampar on behalf of the state government.
Bako lauded Gov. Darius Ishaku’s for his prompt response to the plight of people who are in dire need of assistance due to the flood incident.
“The items will be distributed to only those that were affected by the disaster as directed by Gov. Ishaku,” he said.
Bala assured the victims of government continued support to the 235 households affected by the incident in order to alleviate their sufferings.
Also speaking, Chief Kashima Adinga, the Chief of Dampar, charged those responsible for the distribution to do justice to all the victims.
He appreciated the state government for the quick response, saying it would go a long way in bringing succour to the people.
News Agency of Nigeria reports that items distributed at the event includes bags of maize, rice, cement, Noodles and vegetables oil.
Heavy downpour in the first week of November caused serious flooding in some communities in Ibi, Lau, Donga and Bali local government areas of the state.