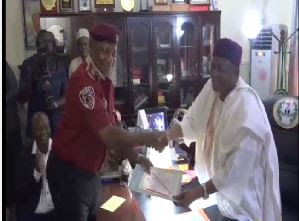 Taraba state governor, Darius Ishaku has called on the Federal Road Safety Corps to make the state’s highways safer ahead of the Christmas celebration.
He also warned that tricycle operators who operate beyond 7pm in the capital city, Jalingo will be arrested.
Owolabi Adenusi reports that criminal activities are usually on the rise in months leading to year end, but the Taraba state government is already staying ahead of the curve and working to control crime.
The governor believed efforts at making security operatives in the state own their own houses will motive them for better service delivery.
The authorities appealed that the road safety corps helps makes the highways safer at this time. The corps assures it will fulfill this obligation but requests for patrol vehicles and other logistics support to enhance its operations.
The state assured the road safety corps’ demands will be met. It also unveils plans to give the agency a permanent building for its operations and now presents the FRSC boss with a Certificate of Occupancy.
The locals commend the governor’s proactive steps in checking traffic related crimes.
The Taraba state governor resumed for a second term in May this year after assuring the people he will improve on security and development.