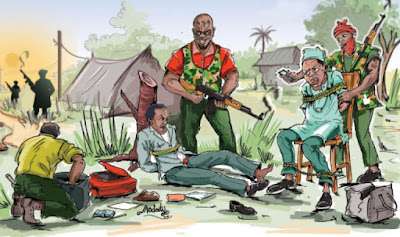 Villagers from Ali, Goggo Ibbi, and Tau, among others in Taraba state, who were under the siege of kidnappers, have narrated their ordeal, shortly after they were freed by a group of local hunters backed by the state government.

The villages under Ardo Kola local government area of the state were recently freed from the siege of kidnappers following a three-day battle between local hunters and armed bandits.

Daily Trust gathered that the bandits, before they were sacked, were the law to themselves and dictated to the local communities.
One of the villagers, who pleaded to be anonymous, said the bandits raped their wives and daughters as nobody dared to challenge them. He said the bandits unleashed terror in the area for several months, as nobody could curb their notorious acts.

“The bandits sleep with any woman including small girls and housewives taken by force by the bandits while husbands and parents watch helplessly,” the source said. It was further gathered that the bandits instilled fear in the minds of the communities and threatened to kill any person that report them to security agents.

“You  will see us going about our day-to-day work as if nothing terrible is happening but inside us, we live in fear and pains,” another member of the community said. In an interview with Daily Trust, he said most members of the community secretly relocated their wives and daughters out of the area because of the bandits’ activities. The source said many farmers that came into the area to farm were either abducted and released on ransom or killed by the bandits. “We know some of the bandits and many of them are members of the community while there are other bandits that came to the area from far away,” the source said. He said when the hunters came and chased the bandits out of the area, every member of the community was happy as normal businesses resumed. “We are now moving freely; we go to the farms and markets without being harass or abducted,” he said. Meanwhile, reports from the area revealed that more bandits and their informants have been arrested by the vigilantes and hunters from within and outside the community.
DAILY TRUST