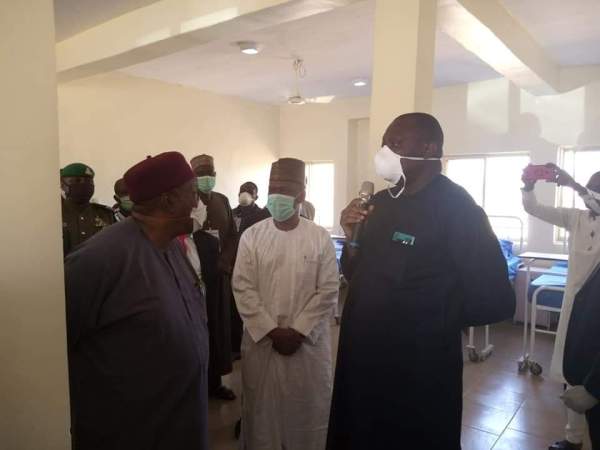 Governor Darius Dickson Ishaku says Taraba State is lucky with the low record of the dreaded Coronavirus ravaging the global community.
The Governor stated this during inspection of the one hundred bed space at the NYSC isolation center at Jauro Yinu.
He said at the moment all positive Covid-19 patients have been declared negative except for the eighty eight Almajiris whose results are still expected emphasizing that efforts are on ground to trace their parents.
Governor Ishaku decried the lack of ventilators and other testing kits to ascertain the true numbers of infected persons and assured Tarabans of his commitment to establish three testing centers for robust testing.
The Governor frowned at the manner people are still finding their way to the state despite the lockdown and charged security operatives to discharge their duties diligently in all border communities of the state.
He expressed happiness that more people are now sensitised on reasons behind the lock down through local government Chairmen and other stakeholders and commended religious leaders for doing same.
Governor Ishaku said the gradual easing of lockdown was what made him to allow people to move from Wednesday and Saturday from eight o’clock in the morning to six o’clock in the evening stating that he will look at the lockdown but not now.
The Governor applauded officials of the mobile court set to punish offenders of the lockdown order despite available reports that some people are still flouting the order.
He stressed that only those on essential duties are allowed to move during the lockdown.
Governor Ishaku thanked Access bank for partnering with the state government for ensuring that the center is set up to fight Covid 19 pandemic.