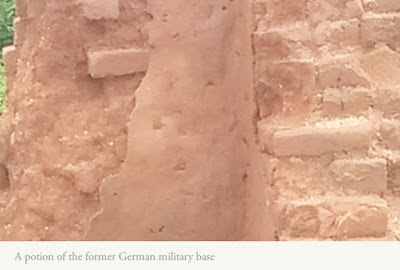 A former German military base in Garbabi, Gashaka Local Government Area, is said to be falling to pieces.

Built in 1910 on top of a hill about 300 meters high, the base, overlooking the River Taraba, was said to have been used by the German military for surveillance before it was abandoned.

Garbabi town is located along the Bali to Gembu Road.

Cameroon was a German colony between 1884 and 1916, but with the defeat of Germany in the First World War, some parts of northern and southern Cameroon came under British control. Some areas in Borno, Adamawa and Taraba states formed part of northern Cameroon.

A visit to the base, made with burnt bricks and located on the flat surface of the hill, measuring the size of a football field, revealed that most parts of the base were destroyed leaving only a little wall still standing.

On the base, one can have a good view of the river, which is 10km wide and 50km across and reportedly a tributary of River Benue.

The base, which was used to monitor the movement of small vessels and canoes, gave the German military a chance to detect the approaching enemy.

Findings revealed that the base was strategic to the Germans as it was located at the boundary with the British controlled northern Nigeria.

Vice-Chairman, Gashaka Local Government Council, Tanko Hamman Julde Garbabi, who served as a guide to this reporter, said many years ago, the walls stood intact and it was easier to identify some rooms and their uses.

He also said some years back, white men said to be Germans used to visit the site regularly, but it had been long when such visits were noticed.

According to a source, Garbabi had a small port in which slaves from northern Cameroon and parts of the former British colony, now Nigeria as well as the French-speaking areas were transported to the coastal areas.

The Chief of Garbabi, Alhaji Iliyasu Umar, said the base was popularly called ‘Dutsen Jamus’ in Hausa language, which means German hill.

He said, “I was informed by some elders in the community that military activities took place in the base during colonial rule but locals were neither involved nor allowed inside.”

He said the base was built between 1910 and 1911 during which residents including young women were forced to supply water for the construction work, exclusively handled by the Germans.

The monarch stated that none of those who participated in the building of the base were alive, adding that an old woman, who was among those that supplied water to the masons, ‘died two years ago.’

The chief disclosed that the British military had their base in Kundi, Bali Local Government Council and that it was near the location that a ‘violent conflict ensued’ in 1915 between the German military and their British counterparts resulting in the killing of a German captain and one other British officer.

He said reports had it that French, British and Belgian troops jointly drove the Germans away during the war in Kundi. He added that the Germans went away with all their possessions, leaving the empty base behind.

The corpse of the German captain was buried by the British troops at a location a few kilometers away from the base, later called ‘Kabarin Bature’ or the grave of a white man.

He said the Germans were forced to abandon their colonies, thereafter; which were taken over by France and Britain under the trusteeship of the United Nations.

Areas in present-day Nigeria controlled by the Germans were Sardauna, Gashaka and Kurmi in Taraba State, Ganye, Jada,  Fufure, Maiha, Mubi ,Madagalli, Michika in Adamawa  State and some parts  of  Borno State.

The chief of Garbabi hinted that it was during the 1961 plebiscite that people of northern Cameroon chose to remain in Nigeria while the southern part voted to go to Cameroon.

Over the years, the building was destroyed by weather and that recently people were seen removing the bricks, which still looked strong, he said,

“It was much later the report that some youths had carted away bricks from the building came to me and l have  banned members of my community from removing any brick from there,” he said.