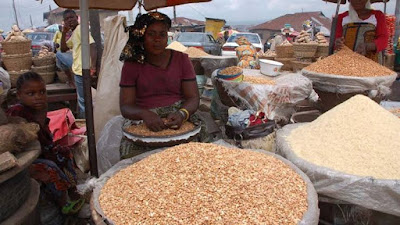 Price of food stuffs has gone up in Taraba state even as farmers are witnessing bumper harvest.

Our finding revealed that price of beans, millet, yam and flour has also gone up to about 25 percent.

The increase in the price is coming when farmers across the state are witnessing bumper harvest.

Merchants, it was gathered are following farmers to their farm lands to buy harvested produce.

Most of the merchants, it is believed, are hoarding the products, a situation which caused high prices of newly harvested farm produce in the state.

In Mutum Biyu, Iware, Garba Chede, Tella and Sabongida markets trucks loaded with farm produce are leaving the markets to various towns where the items are hoarded on weekly basis