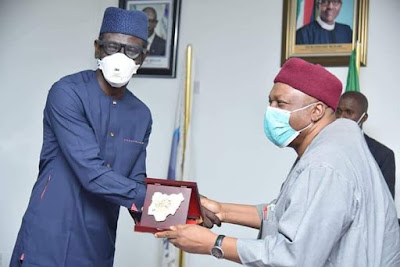 The Taraba State government and the management of NEXIM Bank are working on a partnership that will facilitate the development of agricultural, mineral and tourism potential of the state.

This is part of the resolutions reached at a meeting of the management of the bank and Taraba State governor Darius Ishaku, at the bank’s corporateheadquarters in Abuja yesterday.

Governor Ishaku had briefed the management of the bank on what his administration has achieved so far in the areas of tea production and the plan to invest in coffee growth and production.

He also told the bank’s chieftains what his administration has done in turning Taraba State into a hub for rice production and exportation and plans to develop tourism potentials of the state.

A press statement issued by the special adviser to the governor on media And publicity, Bala Dan Abu, said what Taraba State needed now was the bank’s assistance for highland tea and palm oil to be produced in larger quantities to meet local and international demands.

He said with increased production capacity of the tea factory in Kakara, Sardauna local government area of Taraba State, and coffee growth and production, thousands more of the youths in the state will be empowered. He said palm oil produced in the state is the best in the world and is in high demand within and outside the country.

Governor Ishaku told the bank’s chiefs of the tourism potentials in the state and his regrets that insecurity in the state had hindered its development into a huge revenue earner. He assured that the insecurity problem was already being tackled and what has been achieved so far has been encouraging to the extent that Hausa and Fulani leaders from the areas recently came to thank him for his efforts in this direction.

Responding, managing director of the bank, Abba Bello said the bank had already, through its own investment research and findings, discovered that Taraba State is a huge investment destination for the bank.

He assured that the bank would assist the state in taking Highland Tea to the global market and suggested a group that will work on a Memorandum of Understanding on this and other areas of business promotion as requested by Governor Ishaku.

He assured that the bank was willing to commit funds for the development of tea, coffee and other very viable business opportunities in the state.

LEADERSHIP Friday reports that a technical team from the bank is soon to visit Taraba State for a meeting with senior government officials to further work on the suggested areas of support and collaboration.