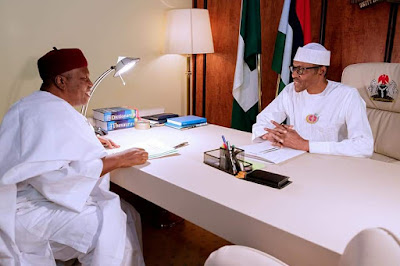 Governor Darius Ishaku of Taraba state has showered encomium on president Muhammadu Buhari for giving approval for the construction of a bridge across river Ibi after many years of neglect.

The bridge across river Ibi which is expected to be 2.3km long with an access road of 8km on both ends was awarded by the Federal Government to RCC at the cost of N57 billion.

Ishaku who on Friday visited the site of the project in Ibi town, assured that his administration is ready to render support to the contractors whenever the need arises.

He explained that the bridge when completed would ease movement and also boost commercial activities.

In his words ” we are most grateful to president Muhammadu Buhari for facilitating this project in Ibi.

“I remember the president visited Ibi when he was heading PTF, but at that time this project was not achieved.

“But today we are happy that it is during his reign as President that this bridge which has been in line for long was finally approved for construction.”

Governor Ishaku moreover urged the host community to remain hospitable to the contractors handling the project.

Earlier in his address, the site engineer, Adetona Elijah explained that building materials and equipments have started moving to site.

He also said the soil testing phase has been completed while full scale operation would commence in October.

Elijah was also optimistic that the project would be delivered and ready for use before the end of 2021.